Many of Adobe's apps, including Photoshop CC, Lightroom CC, Illustrator CC, InDesign CC, and Premiere Pro CC are being updated with new Touch capabilities for use on Windows tablets and Apple trackpad devices. 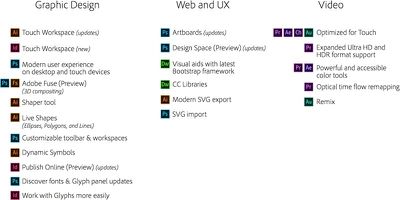 Adobe Audition CC includes a new Remix tool for adjusting the duration of a song to match video content. Remix is able to automatically rearrange music to any duration to create custom tracks that fit video creation needs. It's also able to generate synthesized speech in dozens of voices for custom narration and scratch voiceover.

Adobe's fall updates are the second major round of updates the company's Creative Cloud apps have seen this year. The apps also saw significant feature updates in June.

I am curious if the cloud madness is finished in some years. Then maybe I will buy Adobe software again, but not for rent.

I believe that those companies currently have greater losses than they want to believe an/or to publish. Of course I hope so ;-)

Adobe's subscription service has been around since 2012. Obviously they're doing OK with it.

The company benefits because they have a steady monthly income. That's why they do it.

The customer can benefit too... by not having to plunk down $2600 for Adobe Master Collection... and then $500 every 18 months for updates.

Sure... if you bought an Adobe package and kept using that same version for 5 years or more... and never spent any extra money on updates... you'd come out ahead monetarily. But you'd be using progressively older software over time.

Or you make relatively small monthly payments... and you get continual updates.

Adobe never catered to the hobbyist market anyway. Nobody was paying $700 for Photoshop or $2600 for Master Collection for "fun"

It was most likely used for "business"

So if you're using Adobe software to make money... it shouldn't matter the payment method.

I know it was a shock to go from perpetual licenses to a subscription service... but apparently it's going well.

It's $600 a year to get access to every piece of software Adobe offers... plus TypeKit, mobile apps, file and profile syncing and other services.

That's money well spent in my opinion. I can cover my $50/month payment in a little over an hour of work :)
Score: 8 Votes (Like | Disagree)

nagromme
Is it still practically malware, running buggy stuff in the background that clogs your system and your menu bar, is impossible to troubleshoot or even uninstall, phones home every few minutes even when you're not running any Adobe apps, and makes the Guest account unusable?

Or is it just plain well-crafted apps again at last?

And have they fixed more bugs than they've added, for the first time in years? Because you know, they get paid whether they fix bugs or not... pretty sweet deal.

My CC subscription is up. I'm sorry I paid, and I won't be renewing. Back to CS6! I now have sunk money into Adobe for nothing for 2 years, and they're laughing all the way to the bank. The features added since CS6 are bloat that in no way was worth the price.

I remember when Adobe software was my favorite on the planet... good times.
Score: 6 Votes (Like | Disagree)

Morgenland
I am curious if the cloud madness is finished in some years. Then maybe I will buy Adobe software again, but not for rent.
I believe that those companies currently have greater losses than they want to believe an/or to publish. Of course I hope so ;-)
Score: 5 Votes (Like | Disagree)

dysamoria
I don't care about new features. I only care about the bloat and the bad business model.
Score: 4 Votes (Like | Disagree)

I don't think it is justified. I know a lot of artists that use Adobe products and they all seem to be very happy. I myself have PS, LR, Pr, Audition and Flash installed on 2 Macs and one Windows PC and have zero problems. Then again I don't waste time looking for issues. I go in, edit my photos or videos and collect my fees. Simple and painless.
Score: 3 Votes (Like | Disagree)

Still no updates in CC! Only Media Encoder and it takes 4 minutes now to load!!! On a macpro 12c with SSD! FFS Adobe! Get your sh*t together.

I gave up on Media Encoder years ago - iFFmpeg + ffmpeg 2.8.3 and the speed/output is superior to what I've experienced on both Adobe Media Encoder and Apple Compressor.
Score: 2 Votes (Like | Disagree)
Read All Comments