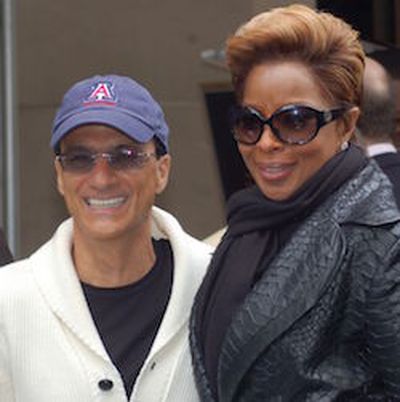 In the one-minute spot, focused on Apple Music playlists, Washington says that Apple's curated playlists are like having "a boyfriend who creates you a mixtape -- in your laptop."

Jimmy Iovine, who joined Apple in 2014 following the company's acquisition of Beats Electronics, has made headlines today following controversial comments he made about women on CBS This Morning today in relation to the ad.

In particular, when asked to explain his thinking behind the Emmy ad, Iovine said that "women find it very difficult at times -- some women -- to find music, …and [Apple Music] helps makes it easier with playlists curated by real people." He proceeded to mention the problem of girls "sitting around" and "talking about boys."

CBS has made the video clip unavailable to viewers outside the U.S. — Mirror
The Verge transcribes:

"I just thought of a problem, you know: girls are sitting around, you know, talking about boys. Or complaining about boys, you know, when they're heartbroken or whatever. And they need music for that, right? So it's hard to find the right music, you know. Not everybody has the right lists, or knows a DJ or something."

Iovine's comments have been widely criticized on Twitter and in several media outlets.

Update: Jimmy Iovine has provided BuzzFeed with an apology, saying "I could have chosen my words better."

Jimmy Iovine told BuzzFeed News, "we created Apple Music to make finding the right music easier for everyone -- men and women, young and old. Our new ad focuses on women, which is why I answered the way I did, but of course the same applies equally for men. I could have chosen my words better, and I apologize."

Orlandoech
OMFG. Get over it! This way too hypersensitive Society we live in is a joke.
Score: 226 Votes (Like | Disagree)

MvdM
What's controversial about his comments? I read them twice.
Score: 64 Votes (Like | Disagree)

Seriously, how many of us old-timers made carefully curated mixtapes for their girlfriends back in the day? He's simply speaking from his point of view and any sane reader should have the capacity (and willingness) to adjust and apply what he says to their own lives.
Score: 62 Votes (Like | Disagree)

Mac Fly (film)
America is hilarious. CNN or CBS is one minute calling for airstrikes to bomb the crap out of some country and on the other reporting someone saying boo to a dear. Outright hypocrisy. It's like that fool walking around New York with a camera strapped to her butt and calling every comment verbal rape. Bring back real journalism. There is a story here, it's that you guys need to take your country back from the news media who tell you how and what to think.
Score: 41 Votes (Like | Disagree)

OMFG. Get over. Way too hypersensitive Society we live in is a joke.

This! People find something a little more serious to "read into" too much or get but hurt over.

I mean quit bullying him for his comments. :)
Score: 33 Votes (Like | Disagree)

OMFG. Get over. Way too hypersensitive Society we live in is a joke.

I am a woman and I do not see anything wrong with the comment. For me the news is about "how stupid can be someone to consider this irrelevant chit chat comment worth an article?
Score: 28 Votes (Like | Disagree)
Read All Comments

Thursday December 1, 2022 4:37 pm PST by Juli Clover
With the launch of iOS 16.1, Apple rolled out a Emergency SOS via Satellite, which is designed to allow iPhone 14 owners to contact emergency services using satellite connectivity when no cellular or WiFi connection is available. The feature was put to the test in Alaska today, when a man became stranded in a rural area. In the early hours of the morning on December 1, Alaska State Troopers ...
Read Full Article • 230 comments

Friday December 2, 2022 2:13 pm PST by Juli Clover
Apple in late October began testing iOS 16.2 and iPadOS 16.2 updates, providing betas to both developers and public beta testers. As of now, we've had four total betas, with the fourth beta having been released earlier this week. iOS 16.2 and iPadOS 16.2 are expected before the end of the year, and we thought we'd try to narrow down the launch timeline. With only four betas released since...
Read Full Article • 52 comments

Friday December 2, 2022 10:54 am PST by Juli Clover
Google is continuing on with its attempt to convince Apple to adopt the RCS messaging standard, publishing a new "it's time for RCS" blog post. Promoted heavily by Google, RCS or Rich Communication Services is a messaging standard that is designed to replace the current SMS messaging standard. It provides support for higher resolution photos and videos, audio messages, and bigger file sizes, ...
Read Full Article • 567 comments