Sotheby's will soon be auctioning a contemporary Macintosh painting by the late Andy Warhol, a successful artist known for his paintings of iconic American objects like Coca-Cola and Campbell's Soup and celebrities including Marilyn Monroe, Elvis Presley and Muhammad Ali. 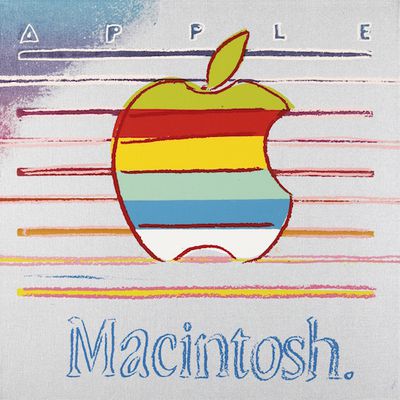 The acrylic and silkscreen canvas painting is part of Warhol's "Ads" suite from 1985, one year after the original Macintosh launched. The painting, which features Apple's old rainbow logo sandwiched between the words Apple and Macintosh, is estimated to receive between $400,000 and $600,000 U.S. at auction.

"We went into Sean [John Lennon's son]'s bedroom–and there was a kid there setting up the Apple computer that Sean had gotten as a present, the Macintosh model. I said that once some man had been calling me a lot wanting to give me one, but that I'd never called him back or something, and then the kid looked up and said, 'Yeah, that was me. I'm Steve Jobs.' And he looked so young, like a college guy. And he told me that he would still send me one now. And then he gave me a lesson on drawing with it. It only comes in black and white now, but they'll make it soon in color...I felt so old and out of it with this young whiz guy right there who helped invent it." — Andy Warhol

The starting bid for the Macintosh painting will be $280,000 U.S. when the eBay auction starts on November 12 at 9:30 AM Eastern. The painting is in very good condition overall based on the Sotheby's report, with only light wear and handling along the edges, minor hairline craquelure, possible retouching and a few other blemishes.

mrxak
I'm not really an Andy Warhol fan, but those criticizing him here saying they don't get art, you're right, you don't get art. More accurately, you don't get art history. It may look obvious and simplistic now, decades after the fact, but there's a reason nobody really did it before he came along. It took a certain creative genius (read: insanity) to come up with doing this sort of thing, and Andy Warhol did "it" very well. Furthermore pop art follows from a long history of artistic movements, going back through expressionism to impressionism (I'm skipping a bunch of steps, but those are the ones you've probably at least have heard of). The same sorts of criticism you're leveling at Andy Warhol was leveled at people like Vincent van Gogh or Claude Monet, and will continue to be leveled at all the greats of every new art movement.

I also find it particularly amusing that so many people on this site of all sites would be making fun of Andy Warhol for being too obvious or simplistic. In retrospect, the same can be said for everything to come out of Jony Ive's lab, yet presumably if you're here you're a fan of his work at least on some level. So I'll just ask you all, what's wrong with simplicity?

I had no idea Andy Warhol ever used Apple as a subject, but I'd certainly say they're a match made in heaven.
Score: 7 Votes (Like | Disagree)

fourthtunz
I'd like to know the back story of how Steve Jobs ended up bringing a Mac over to John Lennon's house :)
Score: 6 Votes (Like | Disagree)

kemal
No one will ever need to spend more than 640k on this.
Score: 6 Votes (Like | Disagree)

Porco
I preferred his Amiga work.
Score: 5 Votes (Like | Disagree)
Read All Comments