KGI Securities analyst Ming-Chi Kuo has released shipments forecasts for the iPhone, iPad, Mac and Apple Watch for upcoming fiscal quarters. Kuo estimates between 70-75 million iPhone and 3.5-4 million Apple Watch shipments during Q1 2016 of the fiscal year, which encompasses the busy holiday shopping season in the U.S., Australia, Canada, Europe and many other regions. 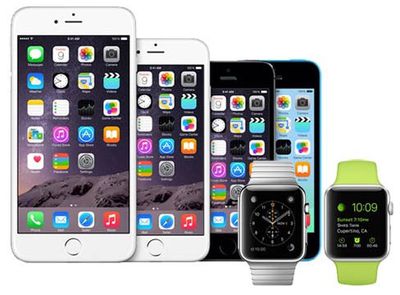 In a research note, a copy of which was obtained by MacRumors, Kuo believes that iPhone sales momentum could gradually decline in the new year, possibly enough for the device to experience its first year-over-year shipments decline in the first quarter of a year in 2016.

However, as we do not expect overall demand for iPhone 6s to be significantly stronger than that for iPhone 6, we expect shipments momentum could gradually decline in 4Q15-1Q16F on a YoY basis. We expect iPhone may see its first YoY shipments decline in the first quarter of a year in 2016.

The analyst expects iPad Pro shipments to be around 2 million in fiscal Q1 2016, and believes the tablet's higher selling price will help offset an annual decline in iPad shipments, which could fall 16% to 40-42 million units in 2016.

We now expect shipments of iPad Pro to be around 2mn units in 4Q15, versus our previous forecast of 4-5mn units given quality issues with Sharp’s panel supply. However, thanks to a higher shipments weighting of iPad Pro, coupled with a lower mix of iPad mini, we anticipate the ASP of end-products and some components will trend up in 2016F (e.g. we estimate the ASP of backlight unit to rise 30-35% in 2016). This should be enough to offset total iPad shipments decline, which we estimate will fall 16% to 40-42mn units in 2016F.

Kuo expects that, amid lackluster sales for PCs, Mac sales will continue to be better than those of competitors. The well-informed analyst says the 13.3-inch MacBook Pro is Apple's most popular notebook, followed by the 12-inch MacBook, and expects the new iMacs with 4K and 5K Retina displays to account for at least 50-60% of total iMac shipments in Q1 2016 of the fiscal year.

No one--NO ONE--keeps sales figure a secret if they are amazing.

It means, undeniably, the figures are dismal. I would take the analysts analyses and cut it in half--2M for Q1.

Except apple has stated that they wouldn't disclose sales figures even before the watch went on sale.

But thanks for throwing numbers that you pulled out of your rear on the internet
Score: 16 Votes (Like | Disagree)

None of the Apple Watch numbers will be accurate, but these "analysts" will keep throwing out numbers till something sticks

Even if they were spot on we wouldn't know they were accurate because Apple are still keeping the true sale figures secret.
Score: 9 Votes (Like | Disagree)

v0lume4
Apple cannot sustain increases in year-over-year iPhone sales forever. I wonder when they will have their first YoY decrease like the article mentions. Not being a pessimist, but I'm just saying.
Score: 9 Votes (Like | Disagree)

Except apple has stated that they wouldn't disclose sales figures even before the watch went on sale.

Yeah--I don't know why people have such short memories about this. Well before one person even owned an Apple Watch, we knew they would not be sharing sales figures. And that's because everything Apple makes will now be compared to iPhone sales--Apple knows anything less than that would be considered a failure so they just choose not to play that game with the media. Unfortunately, MacRumors forum members still make it into something it's not.
Score: 9 Votes (Like | Disagree)

keysofanxiety
Why don't the analysts predict something that can't be wrong: that no matter what sales numbers Apple announce, the stock will still drop for whatever reason :D
Score: 8 Votes (Like | Disagree)

No one--NO ONE--keeps sales figure a secret if they are amazing.

It means, undeniably, the figures are dismal. I would take the analysts analyses and cut it in half--2M for Q1.