Apple has announced that it will be opening its 21st retail store in China in Dalian, a major port city in southern Liaoning Province, on Saturday, October 24 at 9:30 AM local time. The new store will be located in the six-floor Parkland shopping mall at 19 Jiefang Road in the urban Zhongshan District. 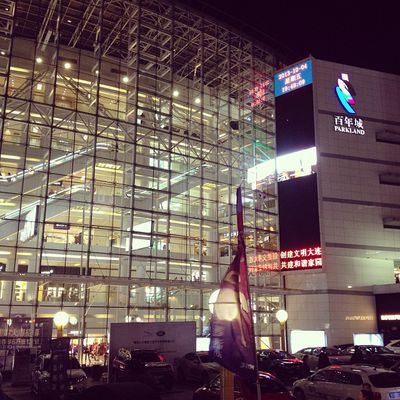 Dalian, a city of 4 million people with a total of over 6.5 million people in the region, is located on the Liaodong Peninsula separating the Bohai Sea from Korea Bay in northeastern China. It is a major seaport, financial center and tourist magnet for the region, drawing significant numbers of visitors from China, Japan and Korea.

It will be sad the day that Apple has to make more iPhones for China = MAJOR quality control problem for American shipped iPhones because China have 3 times the demand.

1) What has "shipping" to do with "quality control problem"?
2) Don't worry, there will be 3x chinese happiness to offset your unhappiness. ;)
Score: 8 Votes (Like | Disagree)

It will be sad the day that Apple has to make more iPhones for China = MAJOR quality control problem for American shipped iPhones because China have 3 times the demand.

Not at all. All the phone's are made from the same factories and run through the exact same tests. They probably sit in stock until someone decides where to ship it.
Score: 7 Votes (Like | Disagree)

Benjamin Frost
In the Dalian Apple Store, all the Apple Watches will look as though they're melting.
Score: 4 Votes (Like | Disagree)

El Hikaru
Apple will make a lot of money out of the market.

For many Chinese, they have been living under shadow for decades, poverty, unfairness, constantly being looked down from weather neighbor or provincial police.
The happiness of showing off using that large screen gold color iPhone in front of public is beyond a normal US person can imagine. You'd feel you are a very presentable person. Don't just call them materialistic people. They are happy to buy Apple product and all.

Tim Cook seems to know Chinese cultural background, he occasionally shows his appearance in retail stores in China signaling closeness to the consumers. Chinese people are particularly keen to looking up looking down relationship. Chinese don't like people look Chinese down. No one does but they are sensitive.

I know Chinese because my wife is one.
Score: 2 Votes (Like | Disagree)

jayducharme
I don't care which Apple Store is the biggest. I want to know which of them is the thinnest.
Score: 2 Votes (Like | Disagree)

In the Dalian Apple Store, all the Apple Watches will look as though they're melting.