Wi-Fi calling is a feature that lets calls be placed over a wireless connection when cellular connectivity is poor, functioning much like an AT&T M-Cell does now. It's similar to Apple's own FaceTime Audio feature, which also routes calls over a Wi-Fi connection.

AT&T customers can turn on Wi-Fi calling by going to the Phone section of the Settings app and toggling on the Wi-Fi calling feature. From there, there are a set of steps to walk through, including entering an emergency 911 address. Wi-Fi calling is available on the iPhone 6, 6s, 6 Plus, and 6s Plus running iOS 9. 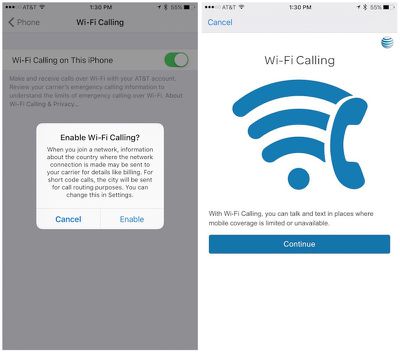 Once the setup process is complete, customers are receiving notifications letting them know the Wi-Fi calling feature will be available after a short activation period.

AT&T promised to launch Wi-Fi calling alongside iOS 9, but last week announced the feature was delayed due to its inability to get an FCC waiver that would temporarily allow the carrier to forgo offering support options for deaf and hard-of-hearing customers. On Tuesday of this week, AT&T finally received the waiver that it needed to move forward with Wi-Fi calling.

sputnikv
charging long distance fees when using a service that puts 0 load on their networks is criminal as does the reoccurring hd-voice fee.
Score: 27 Votes (Like | Disagree)

Just use FaceTime Audio or Skype. There are so many ways to communicate over wifi these days. Tons of options.
Score: 11 Votes (Like | Disagree)

nepalisherpa
I can finally answer phone scammers right away at work now instead of hearing their 2-second silent voicemails later. :) Just for reference, we get no cell signal at work.

Seriously though, this will be amazing for me at home since cell signal is very weak there.
Score: 8 Votes (Like | Disagree)

charging long distance fees when using a service that puts 0 load on their networks is criminal.

the other end of the call is a real telephone number, so i guess that is where they think its fair to treat it as a real cellular call


what is really criminal is what they do with the AT&T microcell. they have you pay $199 for one

there is an optional unlimited microcell calling plan they want you to sign up for, in case you have a plan that has limited amount of minutes. back in 2009, the unlimited calling feature for your microcell was $19.99 a month extra, this allows any of the registered phone numbers are assigned to our microcell ( up to 10 ) to be able to have unlimited calling. just in case they have legacy plans.

oh , but that is not all. any cellular data that you use on the microcell , even though you are providing them with your own internet connection, goes against your plan.

so even though you paid $199 for a microcell you still have to use wifi to prevent AT&T from charging you for going over.

and through this whole mess, little t-mobile is minding their own business and giving away wifi routers and cell phone boosters for those people who need them. they have been giving away cell phone boosters for probably 10 years, and tmo is even giving out marshmallow to all the old phones, and people just go on forums and say that t-mobile sucks.
Score: 7 Votes (Like | Disagree)

So now I get to pay AT&T & Comcast to use my own network and the public internet to route my calls. All to make up for AT&T's crummy service coverage?

I'm not sure why so many people are whining about this.

You've lost NOTHING by having Wi-Fi calling available to you. Before if you were in an area with good Wi-Fi but lousy cellular reception, you couldn't make calls or do SMS at all. Now you can.

So what if it's your own network that you're paying for? You don't pay extra for this.

Things have improved at no additional cost to you. Stop complaining. :)
Score: 7 Votes (Like | Disagree)

How do we know when it's activated? Is there a logo at the top of the screen that says WiFi like the old M-Cell logo? I activated twenty minutes ago and nothing...