Apple today sent a few iPad Pros over to Disney, where Disney animators were able to use them alongside the Apple Pencil to test out the iPad Pro's drawing and sketching capabilities in a professional environment.

Disney Story Artist Jeff Ranjo shared a Periscope that demonstrates the iPad Pro in action, and several images of the Disney team's drawings were shared on Twitter. The Disney team was using a beta version of popular drawing app Procreate, which has been updated to work with the iPad Pro, and an iPad Pro version of Paper by Fiftythree was also shown off.

Apple brought in some cool new toys. If I could get the artists to put them down then I could get a turn. pic.twitter.com/WpuLHvRSvp — Paul Hildebrandt (@paulhildebrandt) October 6, 2015

In the Periscope, Ranjo was impressed with the grip of the iPad Pro's screen when used with the Pencil, and he also was a fan of the palm rejection features. When drawing on an iPad Pro, the palm of a hand can be rested on the screen, but it's still responsive to zoom gestures. At the end of the video, which is well worth watching to see the iPad in action, he says "Let's order a bunch of them." 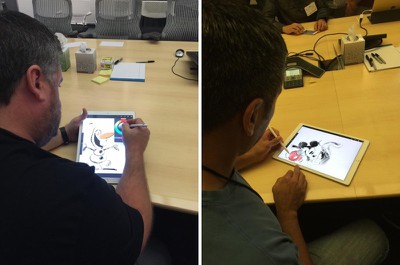 Apple's iPad Pro, Pencil, and Smart Keyboard will launch in November. Apple has not yet provided an exact release date for the new tablet, but recent rumors have suggested it could debut early in the month.

oghowie
The Pro actually looks smaller than I thought.
Score: 16 Votes (Like | Disagree)

nickyD410
Why cant they just throw up the pre order page already.

Vegasryn
Glad to see that MacRumors has a "DONT BUY" recommendation :rolleyes:
Score: 8 Votes (Like | Disagree)

ipedro
I was planning on getting one until several minutes later when they revealed 3D Touch for the iPhone 6s. Once you've used 3D Touch, it's hard to go back to not having it. Releasing a brand new flagship product without the latest tech is a big mistake.
Score: 7 Votes (Like | Disagree)

Personally, I'd way rather the Surface Pro 4.

For all this money, I'll take the far greater flexibility.

I watched the keynote, when the presenter scribbled on OneNote there was observable latency for the "outflow" of ink. Also he failed to demonstrate activation of Cortana by the Pen. Hopefully iPad Pro will do it better - so far every review said it has near zero latency.
Score: 7 Votes (Like | Disagree)
Read All Comments

Sunday August 1, 2021 6:21 am PDT by Sami Fathi
Models of the Apple Watch Series 6 with titanium cases part of the "Apple Watch Edition" collection is currently widely unavailable for pick-up in several of Apple's retail stores in the United States and is unavailable entirely for delivery in major markets. Noted by Bloomberg's Mark Gurman in the latest edition of his "Power On" newsletter, titanium models of the Apple Watch Series 6,...
Read Full Article • 156 comments