Philips today announced its first HomeKit-enabled product, debuting the Hue Bridge 2.0, an updated version of its original Hue Bridge. With the Hue Bridge 2.0, its line of Philips Hue lights are able to work with Apple's home automation platform, allowing all existing and future Hue bulbs to be controlled with Siri voice commands.

Commands like "Turn lights red" can be used for specific colors, while commands like "Set the lamp to 30 percent" can be used for dimming. Lighting scenes that have long been available in the Philips Hue app can now be turned on using Siri. With HomeKit integration, an entire household of lights can be manipulated with a single command. 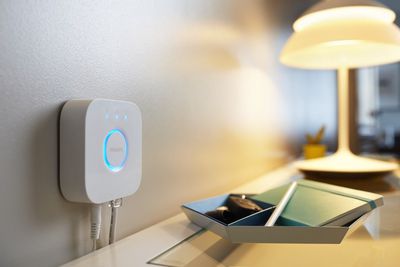 "Lighting is the most accessible aspect of the connected home, and as the lighting expert for the Internet of Things we are taking connected lighting to the next phase," said Eric Rondolat, Chief Executive Officer at Philips Lighting. "By integrating Philips Hue with Apple HomeKit, we are broadening people's experience of light beyond what has been previously possible, providing seamless interoperability with other connected home devices."

The new Hue Bridge 2.0 looks similar to the existing Hue Bridge, but it is square like the Apple TV rather than round. Along with the new bridge, Philips is also debuting a new set of lights. The new Hue bulbs are somewhat brighter at 800 lumens instead of 600 lumens.

The original Hue Bridge will not be updated with HomeKit compatibility as it does not have the necessary hardware, but Philips plans to continue to support it with software updates. Original Hue Bridge owners will need to purchase a Hue Bridge 2.0 to access HomeKit, but will get a discount of $20 on the product.

The new Hue Bridge 2.0 is priced at $60, but customers who own an existing Hue Bridge can get it for $40. The full lighting kit with new bulbs and the new bridge is priced at $200. All new Hue products are available beginning October 6 from Apple retail stores, Best Buy, and Amazon.

AngerDanger
Nice, another rounded rectangle to put on my walls! We are reaching a point where we'll be able to adorn our homes with app icons—the reverse skeuemorphic era.

Mac Fly (film)
In 2015 wireless bulbs shouldn't require bridge hardware. The mere idea of these existing frustrates me. They are like power bricks—yuck! The bulbs should be designed to be popped into the light fixture whereby they would appear in the app to be setup via an ad-hock connection and via password from your mobile device connect to the network. Yes, it would require more hardware and software work on Philips part to get their bulbs to work like this, but that is their job and it is technically possible. And if the bulbs cost $5 extra to do this, so be it. It would simplify setup and ownership of these bulbs greatly, and there would be savings from the lack of fussy bridge hardware.
Score: 21 Votes (Like | Disagree)

Mmmphf.. Seems to work fine with my Amazon Echo right now as-is (no color changing ability yet). Not sure what the hardware is missing to receive simple commands from Siri. I like the bulbs but the fact there's still an annoying, finicky "hub" that needs to be plugged in and hardwired to my router in 2015 seems weak. I have 8 of the bulbs so although I'm complaining I still use them and am not compelled to spend 40 bucks just for Siri connectivity that SHOULD work with my existing unit, feels too much like a money grab.

I think you should read up a bit more on HomeKit and what it entails before criticising Philips for money grabbing.

Things like end to end encryption require considerable processing power and HomeKit certified chips which have been in short supply until recently. These certified chips also have a cost which you probably wouldn't want to incur in every single lightbulb when the bulbs are already expensive enough. The net result is that upgrading the bridge is the sensible way forward and at $40 with the discount is very reasonable. I doubt that Philips make much if anything on the bridge. I wouldn't be surprised if they even make a small loss on it at that price. The other thing you need to be aware of is that the bulbs talk to the bridge using a wireless communications method called Zigbee which you can read about on Wikipedia but it makes a lot of sense for this application as it operates as a mesh topology where the bridge only needs to be in range of the first bulb which in turn can relay communications to bulbs further away. In a typical house you may not get good wifi coverage from end to end of the house but you are highly likely to have a series of lightbulbs which can take advantage of the mesh topology.

spazzcat
I will buy this today, if it is easy to create voice command to turn on all lights, set them to red any time I say "red alert"...
Score: 12 Votes (Like | Disagree)

Muceda
I can imagine the scene. "Siri turn on the light" Then the apple watch buzz to make you stand up and stretch or walk ... LOL!
Score: 11 Votes (Like | Disagree)

friedmud
In contrast to most of the posters here... I'll say that I'm really pleased with this news.

If anything, this shows the POWER and flexibility that come with using a Hub.

I have hundreds of dollars invested in Hue light bulbs and now for just $40 I can make them all HomeKit compatible. That's a damn good deal!

Imagine if there was no hub and Philips had used a proprietary protocol for the bulbs... they came out long before HomeKit and therefore would have NO chance of being HomeKit compatible.

By keeping the lights simple and putting all of the processing in the Hub, Phiips have actually protected their customers from future changes in the home automation field.

I'll be buying one of these hubs IMMEDIATELY! Thanks Philips!
Score: 8 Votes (Like | Disagree)
Read All Comments