As developers get their hands on Apple TV, they've started experimenting with its new operating system tvOS, testing new kinds of apps and finding tidbits that haven't been discovered yet. Developer James Addyman, for instance, has created an emulator for the new Apple TV called Provenance. 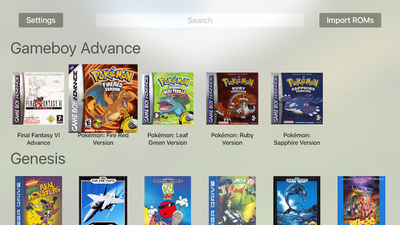 While Provenance is still being developed and it's unlikely the app will make it into the Apple TV's App Store, other developers can test Provenance as Addyman continues work on it. Addyman says certain issues still need to be corrected, including determining when the Apple TV will erase its local content and how to properly map old Sega and Nintendo gamepad functions to the Siri Remote. Addyman began developing Provenance last week within the tvOS simulator.

Mirroring Addyman's concerns about mapping old Nintendo and Sega gamepad functions to the Siri Remote, developer Steve Troughton-Smith points out how many inputs can actually be used for playing games.

So the gamepad situation is even more dire: you have dpad, accelerometer, and one button. They *really* need to revert that gamepad decision — Steve T-S (@stroughtonsmith) September 18, 2015

While the touchpad can be clicked, acting as a "second button", it can't be clicked easily while being used to control movement. This could make game development difficult, as games have to be able to be played on the Siri Remote.

Troughton-Smith has also been revealing Apple TV tidbits as he explores the dev kit. For instance, when a user picks up the new Siri Remote it senses it's being held and automatically wakes up the screen before a button is pressed. IR is used to control a TV's volume with the Siri Remote and your TV remote can be used to control the Apple TV.

Additionally, the existing Apple TV IR remotes also work with the new Apple TV. This includes the silver aluminum remote that ships with current Apple TVs and the original white plastic Apple TV remote. While they don't allow you to access Siri, they do allow you to navigate around the Apple TV's interface.

Finally, with Apple TV dev kits in the hands of developers, some have made their way onto sites like eBay and Craigslist for sale for up to $1,000.

Yes! GBA Emulator! I may actually get one just for that.

You do realize that the App Store rules still exist, and are not any less strict for tvOS than iOS right? There is no way an emulator will be allowed on the App Store.
Score: 15 Votes (Like | Disagree)

Finally, with Apple TV dev kits in the hands of developers, some have made their way onto sites like eBay and Craigslist for sale for up to $1,000.

I hope Apple is tracking this. Any developer who attempts to sell their pre-release hardware should be permanently removed from the developer program.
Score: 14 Votes (Like | Disagree)

You do realize that the App Store rules still exist, and are not any less strict for tvOS than iOS right? There is no way an emulator will be allowed on the App Store.

Please, please, Apple, just this once? We hardly ever ask for many different—sometimes contradictory—things that we'll later complain about for being implemented in ways we don't like!

i don't get why people get all excited for emulators.

you can play any game you want on your computer, phone or tablet as it is.

so you can play it on your tv now? woopty doo? just mirror your ipad and there you go.

A lot of lag mirroring the iPad
Score: 8 Votes (Like | Disagree)
Read All Comments

Tuesday October 4, 2022 3:30 am PDT by Hartley Charlton
The European Parliament today voted overwhelmingly in favor of enforcing USB-C as a common charging port across a wide range of consumer electronic devices, including the iPhone and AirPods, by the end of 2024. The proposal, known as a directive, forces all consumer electronics manufacturers who sell their products in Europe to ensure that a wide range of devices feature a USB-C port. This...
Read Full Article • 317 comments