Earlier this week, Apple began allowing developers who won the lottery for an Apple TV Developer Kit to place orders for the devices, and shortly after, Apple began shipping Apple TVs out around the world. As of today, a large number of developers have begun receiving the Apple TVs according to reports on Twitter and images shared with MacRumors. 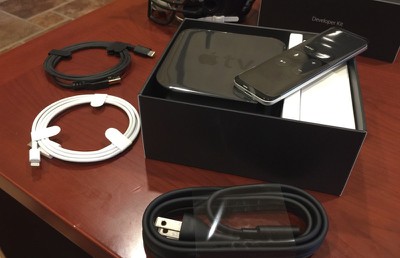 Developers were selected to receive an Apple TV using a lottery process that started shortly after the Apple TV was introduced on September 9, which has now wrapped up. Developers who won were able to obtain Apple TV Developer Kits at no cost, with a $1 fee being charged to verify billing and shipping addresses.

With Apple TVs in the hands of hundreds of developers, we may be able to learn a lot more about the device and how it works ahead of its official late October launch date, and we'll be able to get a closer look at what kind of apps we can expect on it. Last week, there was an unboxing of the Apple TV, which gave us a first glimpse at the new set-top box and the touch-based remote out in the wild.

The new Apple TV includes a powerful A8 processor, 2GB RAM, and a new operating system, tvOS, which supports Siri voice control and a full App Store, allowing games and apps to be played on the device.

Michael CM1
Call me Smuckers because I'm so jelly.
Score: 24 Votes (Like | Disagree)

4K TV is a sillier fad than 3DTV was. At least you could see 3DTV.

Wrong. 4K doesn't require cumbersome, expensive "special" glasses to view or get you dizzy or nauseous when watching. Maybe both are impractical on a small screen but no way is higher resolution media "sillier" than 3D.
Score: 23 Votes (Like | Disagree)

4K TV is a sillier fad than 3DTV was. At least you could see 3DTV.

why would anyone post such nonsense? You read a blog about 4K 3 years ago that called it a fad so you jumped on the bandwagon?
Score: 18 Votes (Like | Disagree)

I'm pretty sure the NDA said not to post any pictures, or discuss it, but I could be wrong.

You don't talk about Fight Club or the NDA.
Score: 13 Votes (Like | Disagree)

You don't have a 4k tv and you know it.
Score: 12 Votes (Like | Disagree)
Read All Comments