Apple introduced the iPhone 6s and iPhone 6s Plus with several new features this week, one of the most significant being 3D Touch. The pressure-sensing technology enables iPhone users to perform additional multi-touch gestures called "Peek" and "Pop" to access Quick Action shortcut menus or preview content within apps.


Apple added a 3D Touch page to its website earlier this week with some examples of what Peek and Pop gestures can be used for, including previewing emails and websites, viewing photos you've taken while taking new ones, quickly accessing your contacts, taking a selfie, quick compose and more. 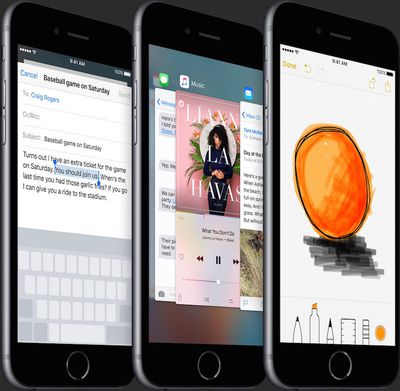 One of the more useful actions that 3D Touch makes possible is pressing the iPhone screen to turn the on-screen keyboard into a virtual trackpad (pictured on left).

One press turns your keyboard into a trackpad.
Press the keyboard within apps such as Notes, Mail, and Messages, and your keyboard behaves just like a trackpad. You can then use a cursor to easily select and manipulate text with precision.

Existing iPads running iOS 9 will also have similar functionality, with users able to control an on-screen cursor by moving two fingers anywhere on the screen, including over the QuickType keyboard, to select, edit and move text.

3D Touch also enables iPhone 6s and 6s Plus users to press the left side of the Home screen to switch to multitasking view, press lightly for finer lines or more deeply for thicker ones in Notes, swipe left to delete an email or swipe right to mark it as unread in Mail and more.

Apple removed this from all iPhones in beta 3 in order to make it 6s exclusive.

It was working just fine but they took it away.

This is a move I cannot accept.
Score: 24 Votes (Like | Disagree)

gsmornot
This was working on iPhones in the beta but they turned it off, I guess for this model of phone to have it exclusively. It worked great and should be returned to the older iPhones.
Score: 22 Votes (Like | Disagree)

Rogifan
I find it quite amusing that people say Apple isn't innovating but then when we get something like 3D Touch or the Pencil it's just a gimmick to try and get people to upgrade. :rolleyes:
Score: 21 Votes (Like | Disagree)

So gimmicky-salesy they didn't even mention the feature in their presentation. Sounds like pure marketing to me! :rolleyes:

Nicky G
By biggest question about 3D Touch on the new devices:

Is there a keyboard option in preferences to enable taptic engine feedback for keyboard presses??? To essentially emulate tactile feedback of a physical keyboard on the iPhone keyboard. To me, this would be AWESOME.
Score: 15 Votes (Like | Disagree)

I find it quite amusing that people say Apple isn't innovating but then when we get something like 3D Touch or the Pencil it's just a gimmick to try and get people to upgrade. :rolleyes:

The Touch ID was also a gimmick according to people. I'm so fond of Touch ID I can't change to android because of Touch ID alone.
Score: 14 Votes (Like | Disagree)
Read All Comments