The update, build number 15A282b, is available through the software update mechanism in the Mac App Store and through the Apple Developer Center. 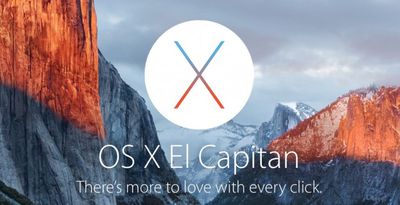 It is not clear if the OS X 10.11 GM will add any new outward-facing changes to El Capitan, as many of the prior betas have focused on under-the-hood performance improvements and bug fixes to optimize the operating system ahead of its public release.

During the beta testing period, Apple seeded eight betas of OS X El Capitan to both developers and public beta testers. The final beta, beta 8, was seeded two weeks ago, on August 31.


El Capitan introduces a new system-wide font, a revamped Mission Control feature, a split-view feature for using two full-screen apps at once, deeper functionality for Spotlight, and improvements to Safari that include Pinned Sites and a universal mute button.

OS X El Capitan will be released to the public on September 30.

Update: Apple's pulled the OS X 10.11 El Capitan GM, and it's no longer available for download. In the Developer Center, it's listed as "Coming Soon."

Release on September 30? Can't believe that. iOS 9 will be released on September 16, which would mean I can't read the notes taken in iOS 9 from September 16 to September 30 on my mac? That would be.. ugly. So I suspect Apple will release the new OS X together with the new iOS

You'll be surprised to hear that last time around the upgrades released one month apart.

Performance has never been so good.:)

The best OS X release since Snow Leopard by a country mile:):):)
Score: 1 Votes (Like | Disagree)

Release on September 30? Can't believe that. iOS 9 will be released on September 16, which would mean I can't read the notes taken in iOS 9 from September 16 to September 30 on my mac? That would be.. ugly. So I suspect Apple will release the new OS X together with the new iOS

The same thing happened last year with people enabling iCloud Drive in iOS 8 and finding they could no longer sync with their Macs. The OS X release was still in October.
Score: 1 Votes (Like | Disagree)

May the GM be installed over the latest public beta?
Score: 1 Votes (Like | Disagree)

devinthomas
I don't see the GM in the app store
Score: 1 Votes (Like | Disagree)
Read All Comments