Monday August 10, 2015 11:00 am PDT by Joe Rossignol
Following the launch of the iPhone 6 and iPhone 6 Plus last September, some users began experiencing issues with the larger-sized smartphones bending in their pockets after normal day-to-day usage. The issue -- informally known as "Bendgate" -- became widespread after a video test revealed it does not take much force to cause a slight curvature in the device. 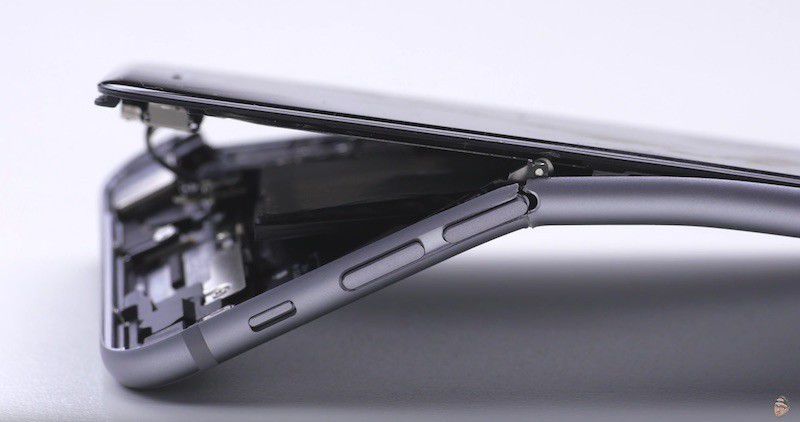 iPhone 6 Plus bend test by Lewis Hilsenteger of Unbox Therapy

Apple later commented that an iPhone 6 Plus bending under normal use is "extremely rare," adding that it had received only nine complaints from customers about the issue at the time. The company said the iPhone 6 and iPhone 6 Plus feature a "precision engineered unibody enclosure" constructed from 6000 series anodized aluminum and "stainless steel and titanium inserts to reinforce high stress locations" on the devices.

Nevertheless, it appears that Apple engineers have tweaked the design of the so-called "iPhone 6s" by strengthening the weak points of the smartphone's rear shell. A new YouTube video shared by Unbox Therapy shows that the areas around the Home and volume buttons on the "iPhone 6s" appear to be notably thicker -- 1.9mm versus 1.14mm -- suggesting that Apple's next iPhones could be less susceptible to bending under normal usage.


Interestingly, the video shows that the "iPhone 6s" rear shell is also slightly lighter, despite having a thicker shell at certain weak points. The purported "iPhone 6s" rear shell weighs in at 25 grams, compared to 27 grams for the iPhone 6 rear shell, suggesting that Apple could be using a new material such as the rumored 7000 Series anodized aluminum for its next-generation smartphones.

Oh how the many many many people on here strongly stated as a FACT that there was NO issue with bendgate, and yet Apple is 'fixing it' hahahaha...


"Fix" and "Enhance" are very different things. You can fix a broken car with a new engine, but to enhance performance doesn't imply there was anything wrong with the original, it's just been improved upon.

I suppose every model since iPhone was introduced meant the previous model was broken by your definition.
Rating: 30 Votes

yet they do not seem to care and dont fix it on current devices. LAWSUIT

The current devices never really bent unless you tried to. And if you try to bend a current 6 Plus, of course it will, anything does.
Rating: 17 Votes

MacFather
no Bendgate they said. Only 9 people complained they said.
Rating: 12 Votes

harley3k
I bet it will still bLend.
Rating: 11 Votes

ipedro
I usually wear fitted pants and the iPhone 6 Plus slides in tightly into my side pocket. At first, I was conscious of Bendgate and was careful to take it out if I needed to tie my shoe laces for example. It was never an issue, my phone never bent and I've even often kept it in my back pocket and sat on it in the car and have never found it to bend in the slightest.

Of course, purposefully applying a lot of pressure with the intention of bending the phone will result in bending it just as kicking in the door of my car with the intention of denting it will dent it. This whole thing was always aimed at an easily impressionable audience and naysayers.
Rating: 11 Votes

Oh how the many many many people on here strongly stated as a FACT that there was NO issue with bendgate, and yet Apple is 'fixing it' hahahaha...

Apple is going to pay for having ludicrously thin devices for no reason, considering Ive only believes in thin devices and not battery life as he has stated.
Rating: 10 Votes

I had the clicking iPhone 6 screen problem, because the screen probably was discreetly loose and I do not recommend the iPhone 6 to no one. Apple replace it my defective one, but I can't bare to use an iPhone that is fragile even to put in and out a hard leather case... the problem is not only with pockets.


Yeah I hate when I go to put my iPhone into a case and the phone just breaks into a million pieces. LOL, seriously?
Rating: 10 Votes

AngerDanger
Only nine people have complained about this issue we have corrected for the millions of phones that we'll ship.
Rating: 9 Votes

No they have fixed the issue. If their was never any issue as apparently stated as fact by users on here, and only 9 people complained, then Apple would NEVER spend the money 'enhancing' the design.
And your'e attempt at making this out to be something else, like it must mean every other iPhone was broken, is pretty immature and lame.


That's weird. I have a 2013 car where they used standard bumper molding around the exhaust pipe, which tends to show exhaust shadow more than if they used a plastic dark material. So in the 2014 model, they changed it to the plastic material. I hardly think that means my car was broken, nor suffered from some horrible design flaw.

When companies refresh product lines, they improve in aspects that they have discovered imperfect. Everyone in my life has iPhone, and I don't know ANYONE who managed to bend their 6 or 6 Plus. Surely it's not an issue that affected the masses or they would have fixed the issue immediately, not waited until the next model\version.

I think you're blowing it out proportion. I beg to differ that Apple wouldn't improve on design, even if it's a minor adjustment.... but you seem really incessant on steamrolling anyone who disagrees, so we'll just have to agree to disagree.
Rating: 9 Votes