Apple today released the fifth beta of iOS 9, and as with the previous iOS 9 betas, there are a few new features and tweaks bundled into the release. WiFi calling for AT&T users has been introduced and is coming soon, Apple's debuted several new wallpapers, and there are tweaks to CarPlay and the iPhone keyboard.

Several bugs have been fixed in iOS 9 beta 5, and features like News and Siri Suggestions are working more smoothly than ever. With approximately a month and a half to go until release, iOS 9 is feeling faster, more polished, and more full featured. For those eager to know all about what's coming in iOS 9 ahead of its release, we've rounded up a complete list of the changes introduced with iOS 9 beta 5 below.

Wallpapers - Today's update includes a wide selection of new wallpapers, introducing images featuring close ups of feathers, flowers, plants, and more. Many older wallpapers have been removed, so people running iOS 8.4 should save their favorites now before they're deleted with the launch of iOS 9. 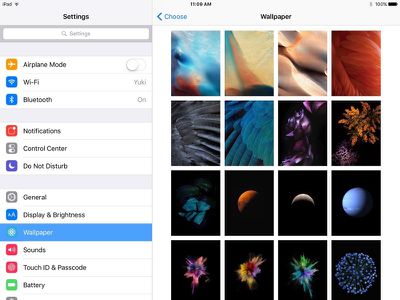 WiFi Calling for AT&T - Beta 5 adds WiFi calling options for AT&T subscribers, but attempting to turn the option on results in a message saying WiFi calling is not yet available. The addition of the setting heralds the imminent release of the feature for AT&T users. Previously, WiFi calling was limited to T-Mobile and Sprint. There's also a new WiFi Assist feature that will "automatically use cellular data when Wi-Fi connectivity is poor."

Apple Music - There's a new "Shuffle All" option at the top of My Music when in Song, Album, or Genre view. It'll play all songs in a music library on shuffle mode.

Keyboard tweaks - On the iPhone, the keyboard has been tweaked and simplified with new shift and backspace keys.

Handoff - Handoff functionality has been changed in iOS 9 beta 5. Previously, Handoff had an option that would allow users to see lock screen suggestions for Apps in the App Store for a relevant location, but now only installed apps will be displayed. In the Settings app, Handoff options under General -> Handoff & Suggested Apps, the option to display App Store apps has been removed.

Regulatory info - The General portion of the Settings app has a new "Regulatory" section that displays regulatory information for iOS devices. This was information was previously hidden (and is still located) in General --> About --> Legal.

CarPlay - The CarPlay interface has been updated, changing the way images are displayed behind music controls and adding the ability to heart songs that are playing through Beats 1 radio or Apple Music.

WiFi animation - There's a new animation that's used when WiFi is turned off. Instead of the bars disappearing one by one, the WiFi symbol now fades to gray before disappearing.

Additional feature updates in iOS 9 beta 5 will be added here as they are discovered. Apple is expected to release at least one or two more update to iOS 9 before the operating system's official launch. iOS 9 is expected to be released to the public in the fall alongside new iPhones.

alcides11
So, who thinks AT&T will once again try to force customers to give up their unlimited data plans by limiting Wi-Fi calling to those on their tiered data plans?
Score: 11 Votes (Like | Disagree)

Dear professional writer: "Apple's" is a possessive form, not a contraction of "Apple has". Should be: "Apple has debuted", or "Apple debuted" for short.

Dear critic: The grammar is correct as written.

Your only possible argument is that some deem it improper for formal writing. But the audience and the site's purpose must be considered.

A site called Mac Rumors may employ informal writing at its discretion.
Score: 11 Votes (Like | Disagree)

pgiguere1
I have a feeling new iPhones may not ship with FCC labels anymore.
See: http://www.engadget.com/2014/11/27/e-label-act-is-good-to-go/

Also, those new wallpapers with a black background would look nice on an OLED panel (Force Touch = flexible OLED if it's anything like the Apple Watch).
Score: 9 Votes (Like | Disagree)

"automatically use cellular data when Wi-Fi connectivity is poor."

THANK YOU! Wi-Fi is so often slower than cellular, especially if you're on the move and the iPhone keeps trying to connect to various public access points, resulting in no connectivity until you turn Wi-Fi off. I'm a happy camper. :)
Score: 9 Votes (Like | Disagree)

sanke1
Finally they realized that those piss poor wallpapers in iOS 8 needed a worthy replacement.
Score: 7 Votes (Like | Disagree)
Read All Comments

Thursday September 29, 2022 12:38 pm PDT by Juli Clover
Tony Blevins, Apple's vice president of procurement, is set to depart the company after he made a crude comment about his profession in a recent TikTok video, reports Bloomberg. Blevins was in a video by TikTok creator Daniel Mac, who was doing a series on the jobs of people he spotted with expensive cars. After seeing Blevins in an expensive Mercedes-Benz SLR McLaren, Mac asked Blevins what ...
Read Full Article • 689 comments