Volkswagen today announced that its first 2016 cars with CarPlay support are arriving at dealerships this week, equipped with the company's next-generation CarPlay-enabled MIB-II infotainment system.

In addition to supporting CarPlay, the MIB-II system also includes support for Android Auto and it comes equipped with Volkswagen's own Car-Net apps, enabling features like remote lock control, remote honk and flash, parking info, stolen vehicle location, automatic crash notifications, diagnostics, and vehicle monitoring. While CarPlay and the MIB-II system don't carry a subscription fee, the Car-Net suite of apps will be priced at $199 per year with 6 months free up front. 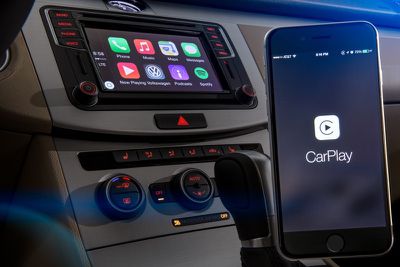 Volkswagen was not one of the first CarPlay partners announced during CarPlay's debut, but the manufacturer promised CarPlay support in its 2016 models back in January. According to Volkswagen, most of its 2016 models will include the new MIB-II system, aside from entry-level models.

Four different MIB-II systems with CarPlay will be offered, varying based on model and trim package. Entry-level VW models include a 5-inch resistive 400x240 resolution touch screen that does not include CarPlay support, while 6.3 and 6.5-inch capacitive touchscreens that support multi-touch gestures, CarPlay, and App-Net will be available in select trims.

The first 2016 Volkswagen models, the Golf R and the Tiguan, are already arriving in dealer showrooms as of late July, and additional models will be released with the MIB-II system and CarPlay support later in the year.

Macman1993
I like the idea behind carplay, but the implementation just sucks. Why can't it just work like airplay and any app can send the UI to the car? This has become yet another category where either Apple or Google are in control, with no chance for a smaller developer to get involved. I'm sick of everything useful having to be either an Apple or Google product.
Score: 16 Votes (Like | Disagree)

Benjamin Frost
I don't want a touchscreen in my car. Physical buttons and dials are better, because you don't need to look at them whilst driving.

As such, I'm afraid that CarPlay doesn't tickle my fancy. There are quite enough touch screens in the world without another one glaring at me in the car. It's also a good reason for not wanting an Apple Watch with its tiny screen glaring at you.

I hope I have made my disdain for too many touchscreens clear.
Score: 13 Votes (Like | Disagree)

velocityg4
$200 per year is really steep for such simple wireless features. It's all really low data usage and most features would only rarely be used if ever. $15 per year sounds more appropriate.

As for Carplay it sounds neat. But will you have to replace your car stereo every three or four years to maintain compatibility? The car theft and crash detection/locating would be nothing more than a megabyte of data if that. As for diagnostics wouldn't that just be displaying the codes already in the cars computer without using a code reader?

The only one that might be of some value is parking information. If you live in a big city and all parking lots and parking meters are tied in.
Score: 7 Votes (Like | Disagree)
Read All Comments