Former Beats Music CEO and current Apple Music senior director Ian Rogers made a brief blog post yesterday summarizing some of his background in music leading up to this week's debut of Apple Music while also revealing Apple's launch schedule for iOS 8.4 and the new Beats 1 radio station.


According to Rogers, iOS 8.4 will go live at 8 AM Pacific this Tuesday, two hours earlier than Apple's usual iOS update release window. Beats 1 will kick off programming an hour later, offering users around the world a 24/7 streaming music station led by former BBC DJ Zane Lowe and featuring a mixture of interviews and music sets from DJs interspersed with programming blocks from celebrities such as Elton John, Dr. Dre, Pharrell, and Drake.

Tuesday morning we’ll be unveiling the next chapter. Please make a note to upgrade to iOS 8.4 at 8am PT Tuesday, June 30th and listen to the first Beats 1 broadcast at 9am PT. Here’s a Facebook invite to make it easy for you to say yes, you’ll be there, and invite all your friends. See you there.

Aside from Beats 1, which is free to all users signed in with an Apple ID, Apple Music also includes a paid streaming component priced at $9.99 per month for a single user or $14.99 for a family of up to six people. Subscribers will have streaming access to the full Apple Music catalog of over 30 million tracks, with Apple offering a three-month free trial to give users an extended opportunity to test out the new service.

Update: In a series of responses on Twitter, Eddy Cue has confirmed Apple will be releasing a new seed of iOS 9 to enable Apple Music for users on that version, as well as Apple's plans to increase the current 25,000-track limit for iTunes Match (and thus Apple Music's scan/match/upload service) to 100,000 with the launch of iOS 9.

Update 2: Rogers has removed mention of the specific timing for the launch from his blog post, but a Tweet by Rogers yesterday encouraging a user to upgrade at 8:00 AM ahead of Zane Lowe's kickoff of Beats 1 at 9:00 AM remains.

And the sighing too, apparently.
Score: 9 Votes (Like | Disagree)

shandyman
That's cutting it close, considering usually it's quite a polava getting a new iOS update installed within an hour! Had expected it to be out on Monday, giving people a day to get it installed.
Score: 9 Votes (Like | Disagree)

Rogifan
And there's this from Eddy Cue: 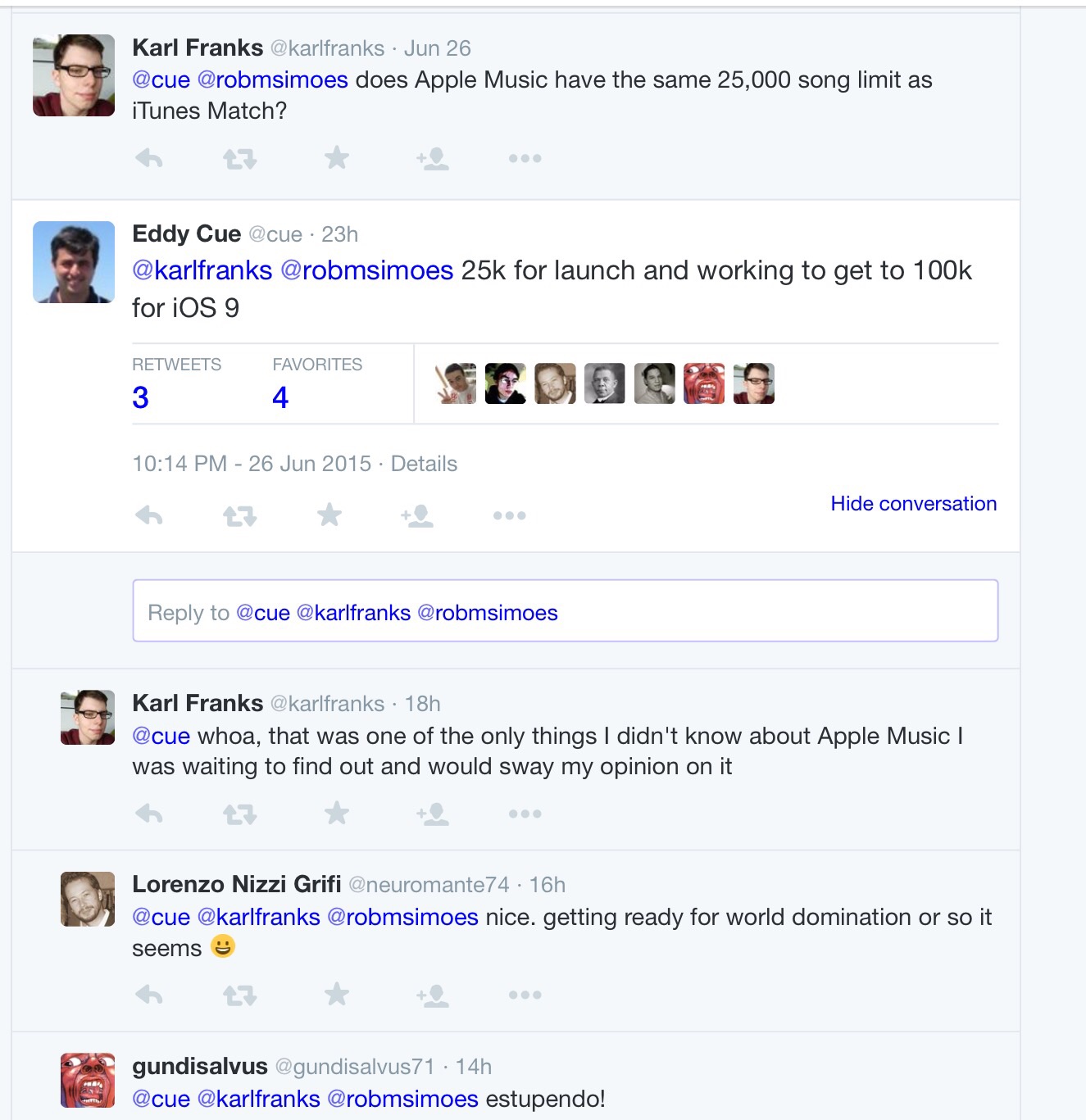 prowlmedia
I think 1 hour to get an update and install is insane. Only about 1000 people will get to hear the launch!

Should have launched the music channel 1 day or even 1 week later. Just run an intro loop or something.
Score: 8 Votes (Like | Disagree)

TMRJIJ
Let see what we got here:

Great. Carry on guys.
Can't wait for this unveiling and I will bookmark certain comments and reply with given praise or 'you failed' posts when we finally see what Apple Music is made of.
Enjoy.
Score: 8 Votes (Like | Disagree)
Read All Comments