Construction on Apple's spaceship-shaped second campus is progressing, as detailed in a new close-up video shared by Skycore on Vimeo. Shot last Monday, the video offers a look at the current state of construction, depicting a finished foundation, the first walls of the ring-shaped structure, and work on an underground parking facility.


Apple has had some issues with campus construction as of late, and in May, the company hired Silicon Valley company Rudolph & Sletten to take over as general contractor, replacing Skanska USA and DPR Construction as work begins on the interior of the building. It is not clear why Apple parted ways with the original general contractor on the project, but according to Skanska, an agreement could not be reached for "the revised scope of work."

Apple's campus features a massive 2.8 million square foot ring-shaped main building, an underground parking lot, a 100,000 square foot fitness center, and a 120,000 square foot auditorium for hosting major events. The entire campus will be covered with hundreds of trees and there will be a central garden with outdoor dining areas. A second phase of development will add several nearby research and development facilities. 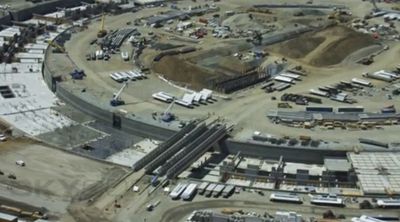 Campus 2 is costing Apple upwards of $5 billion, and it is unclear if its recent contractor shift has increased initial cost estimates. It's also unknown if the project is still on track for a late 2016 completion, but Apple has not notified the City of Cupertino of any delays, so it may still be finished at the end of next year.

AngerDanger
After thousands of years of manually inputting His password, God Himself will be able to enjoy Touch ID.
Score: 19 Votes (Like | Disagree)

2457282
Are we going to be able to visit this when complete or is Angela going to tell us that because of demand we can only experience this online?
:D
Score: 6 Votes (Like | Disagree)

coolfactor
That is the first video that truly gave me perspective of just how MASSIVE that building is! Wow!
Score: 6 Votes (Like | Disagree)

That is the first video that truly gave me perspective of just how MASSIVE that building is! Wow!

Sure the diameter is quite large, but it's only 6 millimeters thin.
Score: 4 Votes (Like | Disagree)
Read All Comments