Apple overnight removed the option to purchase a new iPhone on a two-year contract with AT&T on the Apple Online Store, eliminating the ability for customers to purchase an iPhone for a subsidized price of $199 or $299 through the carrier. Apple now sells iPhones on AT&T exclusively through the AT&T Next carrier financing program, while two-year contracts remain available through Verizon and Sprint. 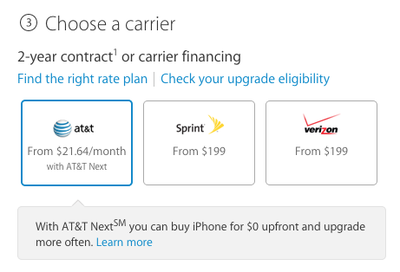 AT&T Next allows a customer to purchase a new iPhone for $0 down and make equal payments for 12, 18 or 24 months until the full price of the smartphone has been paid, at which point the device can be traded in for a new iPhone. The full price breakdown for each iPhone model on AT&T Next, available through both the Apple Online Store and Apple Retail Store, is listed below.

The shift away from two-year contracts is not specific to Apple or iPhone, but rather part of a larger move by AT&T. Droid-Life reported last month that AT&T would begin moving away from two-year contracts on June 1, although the report claims that the option will remain available through AT&T's website, company-owned retail stores, local dealers via direct fulfillment and customer service.

Tapdawg
I can't believe the amount of people fooled by the AT&T Next plan...

Let's do the math: AT&T says that the Samsung Galaxy S4 will have a monthly installment fee of $32, on top of your existing AT&T service fees, which already include a device subsidy. The exact amount of that subsidy is unknown, but most industry estimates have put it at something like $20 per month. That's how you can get a GS4 for $199 with a new two-year contract, even though it costs $620 at retail: after two years, AT&T will have collected $680 in total device payments from you, and you get to keep the phone.

But the balance tips entirely towards AT&T with Next. Assuming that same $20 subsidy, after 12 months of Next you will have paid AT&T $384 in Next monthly installments and $240 in device subsidies, for a grand total of $620. Again, that's exactly the full retail cost of an unlocked Galaxy S4 — but you don't get to keep that phone, even though you just paid full price for it. You have to trade it in to get a new phone — effectively giving AT&T a free GS4 to refurbish and resell to its next unwitting customer.

Now, you do get to keep your Next phone if you pay 20 monthly installments, which will cost you a whopping $1,040 if you assume a $20 subsidy: $640 in Next payments, plus $400 in subsidies built into your AT&T plan. That's $420 in pure profit for AT&T, which just made you pay full price for a phone while charging you inflated service prices that include a subsidy specifically designed to lower the upfront cost of that phone.

I do a lot of iPhone upgrades at my job for AT&T. 9/10 people choose 2 year contracts. AT&T could go out of business for this.

Isn't that likely price driven? With 2-year contact, get the new iPhone for only $199?

The new plan is $0 down for a new iPhone and you pay it out over 12-24 months. Nothing really changes much except customers attracted to $199 might be even more attracted to $0.

I think you are thinking that the end of 2-year contracts means having to pay full price up front for iPhones. That doesn't appear to be the new version of the (same) game.

From my perspective, unbundling the purchase of the phone from a contract appears to be great for consumers. Conceptually, the old way could have a fixed monthly rate carry on well after the cost of the phone is recouped. The new way appears to be a no-interest loan for the cost of the phone which, once it's paid off, falls off of the monthly bill for the balance of the time one might keep using that phone. Paired with shifting from generally $100-$200 down to $0 down, it seems they can sell more phones AND actually deliver a better value for their clients (the latter of which seems very un-AT&T-like... so I must be missing something here).
Score: 11 Votes (Like | Disagree)

No way in hell I'm giving up my grandfathered unlimited data plan.
Score: 11 Votes (Like | Disagree)

jeremypodom
I do a lot of iPhone upgrades at my job for AT&T. 9/10 people choose 2 year contracts. AT&T could go out of business for this.
Score: 9 Votes (Like | Disagree)

s8film40
I've been an AT&T customer since well before the iPhone, but if they stop offering the 2 year pricing that might be the tipping point for me to switch.
Score: 9 Votes (Like | Disagree)

Having looked at this, the new program is better for the user. After you've paid off the phone, you no longer pay the phone surcharge like you did with the 2-year contract (i.e., if you keep your phone longer then two years, your bill doesn't go down). You're free to keep your phone after that, but if you want to upgrade earlier, then you have to trade in your phone.

Of course, you're always free to purchase the phone outright, from what I'm hearing, on the new plan, they'll still honor the Unlimited plan folks.

I'd expect Verizon to follow this before the next iPhone comes out.

The "discounted" next plan is more than my current plan so for me this represents buying the phone outright and raising the monthly cost of my plan.
Score: 8 Votes (Like | Disagree)
Read All Comments