As highlighted by everythingiCafe on Wednesday, Apple Watch owners on the MacRumors forums and Apple's Support Communities have been complaining that their Apple Watches are sending data sporadically, with gaps up to eight hours in some cases. 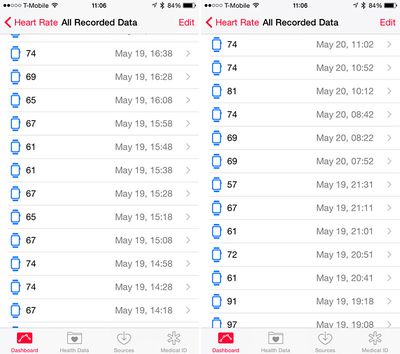 Before update on left, after update on right. Image via MacRumors forum member twisted-pixel.
Many of the users are still seeing occasional updates to the Health app, but at unpredictable intervals that are not as frequent as the previous 10 minute update intervals, and some are also seeing duplicate readings. This bug is not affecting all users, as some people are still reporting regular data transfers, but for the users experiencing issues, unreported heart rate data seems to be irretrievable.

I also noticed that my heart rate data in the health app for about a week period is gone and my heart rate data is now updating into the app intermittently. I spoke with Apple customer service this morning, but data could not be restored and their advice was to restart both the iPhone and the Watch, clean the sensor back, and keep an eye on it. That, unfortunately, has not fixed anything and I think there might be a bigger problem on our, er, hands (or wrists).

For those unaware, the heart rate information collected by the Apple Watch's sensors is aggregated in the Health app on the iPhone, giving users a picture of their overall heart health throughout the day. With consistent 10 minute readings, the iPhone is able to provide clear and consistent data that wearers can share with doctors and use to make health evaluations.

Data that is sent sporadically is less useful for these purposes, causing this bug to significantly impact the health tracking abilities of the Apple Watch for users who are affected.

Some individuals experiencing issues have said that restarting their devices temporarily solves the problem, but the sporadic measurement times return shortly after. On the Apple Support Communities, one affected user who spoke with Apple suggested that his Apple Watch stopped sending heart rate measurements when he was actively moving.

Apple is collecting information from users who call in with the issue, and some have been told that the company is working on a fix.

AngerDanger
I wonder how Apple will put a positive spin on this. 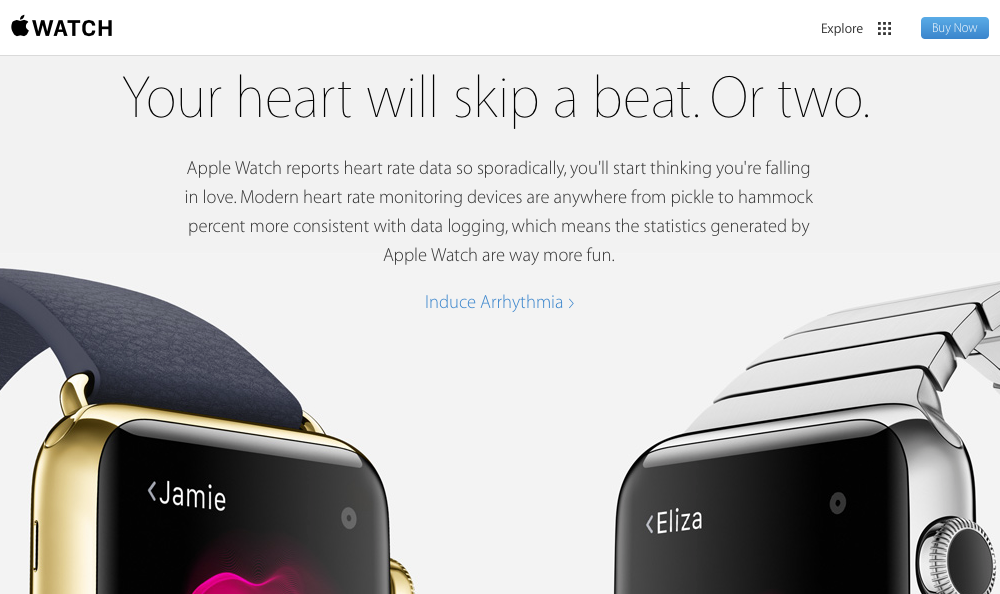 happydude
i'd like to thank all early adopters for helping iron out the major bugs before i get apple watch v.2
Score: 11 Votes (Like | Disagree)

i'd like to thank all early adopters for helping iron out the major bugs before i get apple watch v.2


You're welcome. In the meantime, I'm enjoying the hell out of my watch for an entire year before you do and realizing that these "bugs" are rare and not a big deal.
Score: 8 Votes (Like | Disagree)

Something funny I discovered since .01:
1. remove your watch
2. Access the heart rate glance
Notice that now the green light stays on - on 1.0 it would understand there's no skin there and just stop.
Now, it stays on, and after a little while will start display a heartbeat!!
Apparently the air in my apartment is pretty healthy at 64bpm :rolleyes:
My trust for these numbers just went down by a lot :(
Score: 7 Votes (Like | Disagree)

According to MyFitnessPal, this is how many calories I have left to eat today:

My Apple Watch has decided that the 45 mins of CrossFit I did this morning burned over 400,000 calories.

It's a good job that Friday is cheat day then :)
Score: 6 Votes (Like | Disagree)
Read All Comments