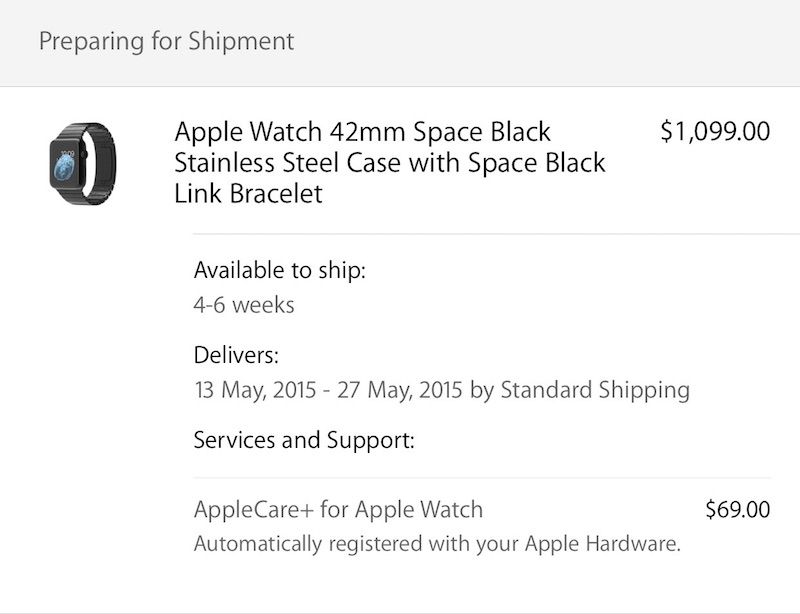 The stainless steel Apple Watch with Space Black Link Bracelet, Leather Loop and Modern Buckle were the last three models of the wrist-worn device that had yet to see movement, remaining in the Processing stage on the Apple Online Store until late Tuesday. Now, some orders have been updated to Preparing for Shipment in the United States, Canada, United Kingdom and likely other first wave launch countries. 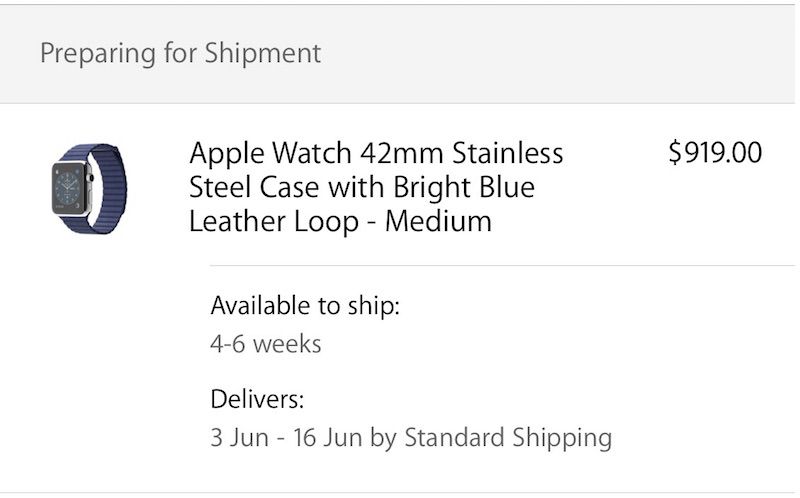 Apple Watch with Leather Loop preparing to ship in Canada

During the Apple Watch pre-order window, many models were listed with 4-6 weeks shipping estimates, or May 13 to May 27. With today marking the start of that timeframe, it appears that Apple is on schedule to begin shipping these delayed models to customers for delivery as soon as today. Many customers have received credit or debit card charges for their orders, indicating that shipments should begin imminently.

Update: Orders are now actually shipping, with delivery set for as early as tomorrow. 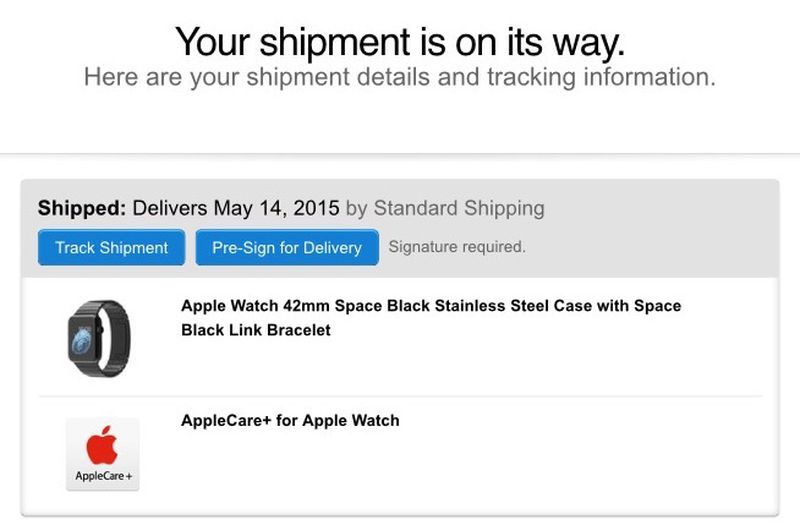 Please keep posting iWatch shipment updates! It's so exciting to hear about boxes leaving distort centers, just knowing there's a rich person waiting to receive it! :DI LIVE FOR THIS!

Hate to break it to you, but the world doesn't revolve around you. Just because you don't have an interest doesn't mean others don't. I suggest you skip the articles that don't float your boat instead of getting your panties in a wad.
Rating: 6 Votes

jwm
Well, the first 2 minutes of the first wave are preparing to ship.
Rating: 6 Votes

Not everything is in American dollars.


I've officially determined that on this forum, it's "cool" to call out Americans, and Americans only.

The first picture was clearly the price in USD, so why not assume the second is also in USD? Especially when it uses the same $ sign and the editor didn't add the Canada caption until after? :rolleyes:

I'm flattered, as an American, that our comments make everyone so butt hurt. America must really be amazing, sheesh. :rolleyes:
Rating: 5 Votes

I feel bad for anyone who spent over 600$ for the Apple Watch. It's not but the novelty wears off fast. Like I told a friend the Apple Watch is like the iPad Mini and iPod Touch, it's there if you want one. It's not a must have/need device. It's a perfect fitness watch, but if you tend to wear designer watches learn fast that that Rolex is a lot nicer than a piece of tech on your wrist.

Speak for yourself. Who's to say what something is worth to anyone els? Maybe it isn't to you,doesn't mean it won't be or is for someone els. Also you don't NEED any device. These are all wants. You can get a blackberry from 6 years ago and make calls and text. But you WANT apps and a easier interface,Touch ID,iTunes....etc. and that's why you bought it.

My fiancée loves her iPad mini (so do others) she doesn't go to work without it. Now does it mean it's for everyone? No.,but it does mean,to each their own.

"One mans trash is another mans treasure"
Rating: 4 Votes

It's disappointing that Apple is gouging their customers on the cost of the watch bands. I have been very critical of Apple's product pricing for years, but the watch band pricing is outrageous and completely unnecessary. Apple does not need to recoup R&D costs through the high profit margin on their Watch accessories and when its costing thousands more for a watch band just because its associated with a gold Edition watch, it is borderline criminal. I thought charging $250 more for an extra $5 worth of memory in an iPhone model was outrageous, Apple's watch band pricing is probably the most blatant form of highway robbery in modern retail history. $599 for a stainless steel watchband is insane, period.

When are consumers going to call out Apple to justify and adjust their profit model? I don't care how much of a fanboi you are, but paying hundreds or even thousands extra for a watch band that does nothing but connect your Apple Watch to your wrist that is just insane, period. Tim Cooks can dupe millions by stating that the components costs are not the total costs of the device, but how do you justify how $20 worth of stainless steel turns into a $600 accessory when other watch manufactures have been making watches with stainless steel bands for far less then that.

The watch band should cost nothing extra for a watch that already has high profit margins. If Timex or Casio did this back in the day, charged you $40 for the watch and then $400 for the band they would simply not exist today. But Apple doing this is not only defended by the fanbois people rush out and support this rip-off by buying millions of these things in the first few days.

Fanbois, time to wake up. Apple is gouging you because they know you are naive, gullible and have no impulse control. You are eskimos and Apple is the slick ice salesmen that wonders into your village one day with a slimy smile on their face...
Rating: 4 Votes

icerabbit
Here's a little throwback in time, surprisingly this is still live in the 10 year old site format, right on the apple site! :)

Not everything is in American dollars.


I get that. It's just strange to have it right beneath something that IS in American dollars.
Rating: 3 Votes