For the third year in a row, Apple CEO Tim Cook is participating in a charity auction through CharityBuzz, offering whoever bids the most the chance to enjoy lunch with him at Apple's headquarters in Cupertino. This year's auction also includes two VIP passes to an Apple keynote event to watch Apple unveil new products.

Two people can have lunch with Cook, and the experience will last for approximately one hour. Lunch is included in the auction price, but the winning bidder will need to cover travel and accommodations. The exact date of the lunch will be scheduled at a mutually agreed upon time after the auction ends on May 6, 2015.

Join me for lunch (and a keynote!) and help a great cause. @RFKHumanRights is working toward a more just world. https://t.co/QxaKne4itb — Tim Cook (@tim_cook) April 15, 2015 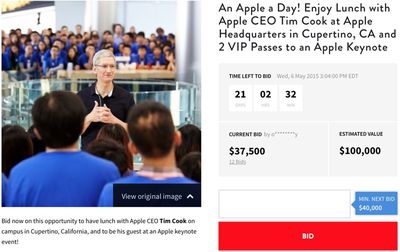 Proceeds from the auction will once again benefit the RFK Center for Justice and Human Rights, a charity that aims to achieve a "just and peaceful world by partnering with human rights leaders, teaching social justice and advancing corporate responsibility."

I'm guessing it hits 700k dominated by bidders trying to get their company name out there :)


IF I WAS TIM COOK I WOULD BEAT THE HIGHEST BID AND THEN JUST HAVE A QUIET LUCH! :D 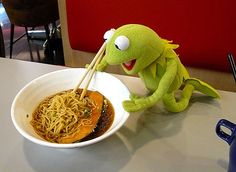 Your jealousy, and reality don't seem to align.

clayj
Whoever wins should ask him why he had such a hissy fit over Indiana yet still does business in Saudi Arabia and other homophobic Islamic countries.
Score: 8 Votes (Like | Disagree)

I hate it how the British use "muppet" as if it were a bad word. The Muppets are awesome!!
Score: 8 Votes (Like | Disagree)

darkslide29
Here is where I'd like to see that Dr. guy who constantly posts about his two new MacBooks and Apple Watch Edition show us his receipt for his bid on this. ;) :o :cool: :apple:
Score: 8 Votes (Like | Disagree)
Read All Comments