iFixit has released Apple Watch repair manuals for various components of the device, including the battery, screen, adhesive, and NFC antenna. The guides provide step-by-step instructions on how to replace the Apple Watch's OLED display and battery, alongside additional steps for repairing the adhesive and NFC antenna that can be damaged as a result of opening the casing. 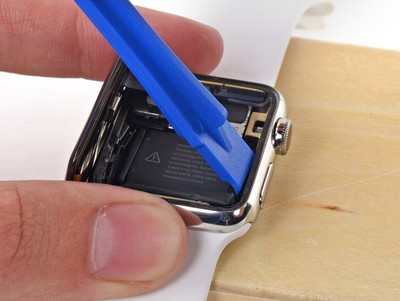 Replacing the Apple Watch's adhesive involves laying the backed adhesive tape down on the NFC antenna, around the edge of the case where the screen rests, using a plastic opening tool to reconnect the display data and digitizer cable connectors, reinstalling the metal bracket, pressing the battery back into its position, and pressing the casing down firmly on the new adhesive.

While many of the tools used in the repair guides are available for purchase, iFixit has not yet stocked the necessary Apple Watch replacement parts needed to make these repairs. Given that the Apple Watch has only been available for one week, it could be some time before the website makes replacement batteries, screens, adhesive and NFC antennas available through it online store.

Am I the only one who thinks this product is ludicrous?


No, your simply someone who can't think beyond yourself. It's a big, busy world outside of your basement.
Score: 6 Votes (Like | Disagree)

Am I the only one who thinks this product is ludicrous?

rumplestiltskin
Am I the only one who thinks this product is ludicrous?
Score: 4 Votes (Like | Disagree)

Finally an article I can make use of in the event I break something. Though I doubt I will considering I have the sturdy SS with Sapphire. I'm always the DIY type. :D


You are aware, that the saphire glass breaks more easily than the ion x glass? ;)
Score: 4 Votes (Like | Disagree)
Read All Comments