As of yesterday afternoon, credit and debit cards have been charged and many Apple Watch pre-orders have begun shifting from "Processing Items" to "Preparing for Shipment" as Apple prepares to send out the first Apple Watch orders to customers who pre-ordered on Friday, April 10.

Shipment emails have yet to go out from Apple, but a few lucky customers have gotten a heads up on their orders through UPS' "My Choice" opt-in emails, which lets people sign up to get notifications whenever a package is sent to their address. These emails suggest the first Apple Watch orders will indeed be arriving on Friday, April 24. 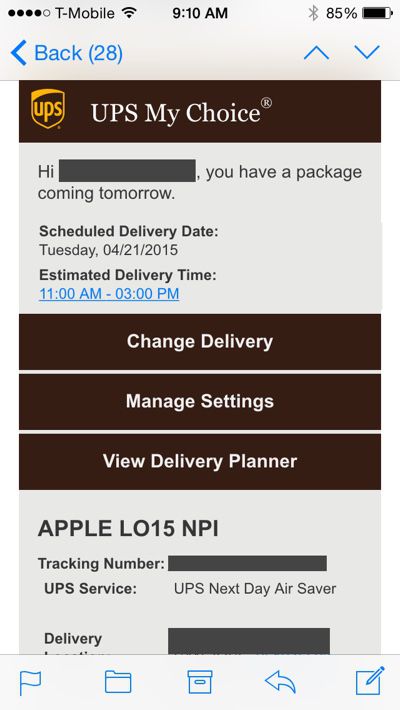 On reddit, one Apple Watch buyer got what appears to be an accidental UPS notice about a package being unable to be delivered, letting him know his Apple Watch is on its way from Rialto, CA. We've also heard from a MacRumors reader who got a similar notice, with an alert about an upcoming Apple Watch package from Apple set to be delivered on Tuesday, April 21.

When checking that tracking number, it states that a UPS shipping label has been created and that the order has been processed and is ready for UPS. Both customers confirm they have no other orders such as accessories currently pending with Apple.

These alerts appear to have been delivered prematurely, as we've seen only these two reports of such notices, and it's unlikely the readers who have a delivery alerts will receive their package before Friday, but they do give us our first hints that tracking numbers are starting to go out and may be showing up in shipment emails in the near future.

While many people who pre-ordered early have had their credit or debit cards charged and have seen their order statuses change, there are some early pre-orderers who still have not had their orders shift to "Preparing for Shipment" as seen in this Google document. Space Gray Sport watches, Space Black stainless steel watches, and stainless steel watches with Milanese Loop, Classic Buckle, and Black Sport Band seem to make up the majority of those that have not yet seen a status change.

Apple Watch orders that have not yet changed should not cause alarm, as based on the early tracking info received, Apple is using Next Day Air shipments.

Customers who do have a "Preparing for Shipment" notification may be able to get an early look at where their watches are located by using UPS and FedEx's "Track By Reference" tools, using a phone number to locate an order.

viperGTS
My status hasn't even changed, yet others are already getting tracking numbers? Wonderful... And I preordered at 12:02. 38mm Space Gray.
Score: 13 Votes (Like | Disagree)

And so it begins!


You're on the wrong site, you need www.SwatchRumors.com

No worries!
Score: 6 Votes (Like | Disagree)
Read All Comments