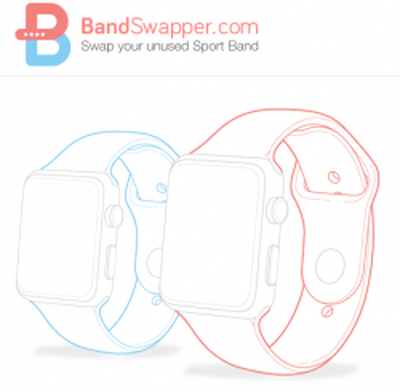 As the Apple Watch pre-orders continue to build this morning, it's worth noting a few third-party websites who plan to provide services to early adopters of Apple's new wearable device. One of those sites is BandSwapper, which will let users swap out their unused Apple Watch Sport Band for another size and color.

As was discovered closely following Apple's big "Spring Forward" event last month, every model of the Apple Watch that ships with a Sport Band - meaning both aluminum and stainless steel - comes in two sizes for both the 38mm and 42mm casing sizes. The smaller 38mm case covers 130-200mm wrists in both S/M and M/L bands, while the larger 42mm option ranges between 140-210mm wrists in S/M and M/L bands.

BandSwapper plans to fix the extraneous multi-band option by allowing Sport Band users to swap the band they won't use, for a completely different size and color band that they will. As the website claims on its currently sparse homepage, "It takes 5 minutes and costs only $6."

Here's How it Works:
1. Tell us which band you have and which one you want.
2. Send us your unused band with one of our pre-paid shipping labels.
3. We’ll send you back a band in the size and color you want.

Currently, the most users can do to prepare for band swapping is provide the website an email address to remind them when the BandSwapper storefront will be live, which will coincide with the Apple Watch's official launch on April 24.

As expected, a lot of Apple Watch-related news continues to circulate today as pre-order estimates begin slipping rapidly and more news on the Watch's warranty surfaces.

Update: As several readers have pointed out, customers do not actually receive two complete sport bands, instead receiving three band pieces that together allow for two different band sizes. As a result, BandSwapper's service will not allow users to trade for a complete band.

troop231
Why is this even a story? I thought the sport model only comes with one piece that has the pin, and two different size pieces of the other side.
Score: 4 Votes (Like | Disagree)

applegeek01
Even this specialist thought it was confusing. Here is my conversation I just had:

Specialist: "Hello! Thank you for contacting the US Apple Online Store, my name is Jenne. Give me a minute while I read over your messages please."

Me: "Sure thing Jenne"

Specialist: "Thanks for your patience!"

Specialist: "Okay, Im going to answer, what I think is your question, and if I dont please correct me! The Apple Watch Sport does come with two bands. They are the same color, whichever you select, the difference is they come in two sizes, so you can see which is most comfortable for you when you exercise as well as in your daily routine."

Me: "So, technically these two bands are made up of four different parts, correct?"

Me: "Understood. So in comparison, the Apple Watch (stainless steel) that comes with the sport band has just three parts? Because it only specifies as coming with "one" band"

Specialist: "Thats so confusing, I see what youre talking about. No matter what Watch collection you buy, if its a Sports band, its going to come with two Sports bands for you!"


So, from her explanation, the video showing 1.5 parts is not valid, or maybe incomplete (even though I thought it to be true). She even admits the whole thing is confusing. No matter what, I'll let you know 24 APR
Score: 2 Votes (Like | Disagree)

Check this video (from 1:20) and you can clearly see there are only 3 pieces in the Sport band box.

I don't see any such thing, clearly or otherwise. I see a heavily edited video; I don't know what was cut out.

I don't see even a single frame showing the three pieces you are talking about. In one place I see two pieces clearly. There might be one additional unseen piece, there might be two.

I don't see a frame where all the pieces are laid out side by side so I can clearly count them. I see white band pieces on top of white package pieces, and I'm not sure what I'm seeing.

I don't understand the written or spoken language in the video, so if the author actually tells us what's in the box, it's lost on me.

But none of the above really matters, because I see no evidence that we're seeing a normal retail Apple Watch. The video appeared the day the embargo was lifted on the review units -- more than two weeks before any actual retail watches or bands will reach real customers. I've seen no evidence (nor even a claim) that the reviewers didn't get custom, non-retail collections of stuff. So this video isn't definitive for me, even if it showed what some people claim it shows.


On the other hand, I see Apple taking orders (as of now) for an item that says there are two bands in the box. "One S/M band and one M/L band". I think Apple is too wise to risk false advertising claims by giving us less than two bands. They could have said "components to make either a S/M band or a M/L band" or something similar. They didn't say it that way.

I'm no lawyer, but taking money from people for "two bands" and delivering one band plus a spare piece looks like false advertising to me. If you sell that to me, I'll hold the first band in my hand, and ask you to show me the second band from what's left on the table. If you can't, I'll ask you to take a second package from stock and make up the deficit, free of charge. If you refuse, I probably WILL contact a lawyer. Maybe the lawyer will tell me a third-party video from Hong Kong has more weight than a plain-english statement on the seller's web page, and I don't have a case.
Score: 2 Votes (Like | Disagree)

applegeek01
This is a waste of an article. It was confirmed yesterday that all of this swapping can't happen.
Score: 2 Votes (Like | Disagree)

budselectjr
I hope they realized they wasted their time and money developing this site.
Score: 2 Votes (Like | Disagree)

Confused by what people are saying about sport model coming with 1.5 bands. How is this of any use?