Apple has begun accepting online pre-orders for the Apple Watch in the United States and other first wave launch countries, including the U.K, Australia, Canada, China, France, Germany, Hong Kong, and Japan.

Orders can be placed through Apple's online store or through the Apple Store app on iOS devices. Supplies are expected to be limited, so customers interested in April 24 delivery dates should order as soon as possible.

Shipping estimates for Apple Watch models were as follows at launch, but are slipping rapidly:

The Apple Watch will officially launch on April 24, which is the same date that some customers will begin receiving their devices at their homes. Pre-ordering is recommended, as Apple will not be accepting walk-in orders for the Apple Watch during the first weeks following launch. All orders must be placed online.

Apple is also selling standalone bands that can be purchased alongside the Apple Watch, and most band orders will ship in May. Modern Buckle bands are unavailable, and Milanese Loop, Link Bracelet, and Leather Loop ship in two to four weeks.

Apple is also accepting try-on appointments in its retail stores beginning today, giving users a chance to see the watch before placing an online pre-order. Appointments for models besides the Apple Watch Edition will last for approximately 15 minutes and will give customers an opportunity to try on multiple devices. We've written a post covering what to expect at your try-on appointment, which is worth checking out before you visit an Apple Store. Try-on appointments can be scheduled through Apple's concierge service, both online and in the Apple Store app. The try-on appointment system is currently experiencing difficulties and may be down for some users.

Apple Watch pricing begins at $349 for the entry-level aluminum Sport model, $549 for the stainless steel Apple Watch, and $10,000 for the gold Apple Watch Edition. All three models can be ordered from the online store beginning now. 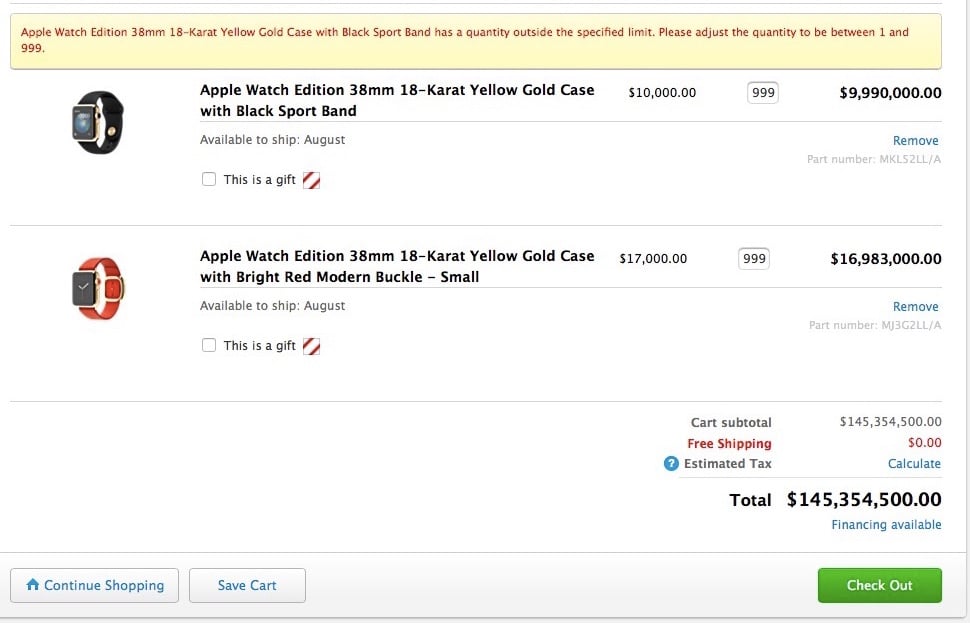 ChrisS1081
I was at work when the Apple watch went up for sale. I had one in my cart but knew I needed to talk with wife about it before I bought one. Well I came home to pled my case to get one only to find out she stayed up till 3 am and ordered one for me already :)
Score: 10 Votes (Like | Disagree)

iZac
So apparently Samsung released some sort of phone today? Who knew?
Score: 5 Votes (Like | Disagree)


So it's either now or not at all?! Why wait over a year rather than 4-6 weeks?
Score: 5 Votes (Like | Disagree)
Read All Comments