Softorino's WALTR app for the Mac, which is designed to make it easy to upload and convert any music or video file to an iPad or iPhone, is getting its first major update today following its November 2014 release. 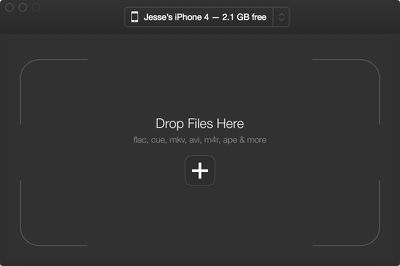 For those unfamiliar with WALTR, it's incredibly easy to use. You simply plug in your iPad or iPhone to your Mac, turn off iTunes, and drag any media file onto the Mac app. From there, the file is converted and uploaded to your device within minutes, plus it's placed into the proper Music or Video app.

WALTR can be downloaded from the Softorino website for free. The software includes a 14-day free trial, after which a single license can be purchased for $29.95.

To celebrate today's update, Softorino is giving away 15 copies of WALTR to MacRumors readers. To enter to win, use the Rafflecopter widget below. You can earn additional entries by subscribing to our weekly newsletter, subscribing to our YouTube Channel, following us on Twitter, or visiting the MacRumors Facebook page. Due to the intricacies of international law regarding giveaways, this giveaway is open only to U.S. residents who are 18 years of age or older.

a Rafflecopter giveaway
The giveaway will run from today, Thursday, April 9 at 10:00 a.m. Pacific Time through Monday, April 13 at 10:00 a.m. Pacific Time. Winners will be chosen randomly on April 13 and will be contacted through email. A response to our email is required within 48 hours or the winner will forfeit the prize and we will pick a new winner.
Tags: WALTR, Softorino
11 comments

hlfway2anywhere
Today I learned that .ASS is a file extension. Thanks, macrumors!
Score: 4 Votes (Like | Disagree)

Sheza
Another competition only open to US residents - for why?

What part of this competition involves any form of transfer that costs more money to a different country than it does to US-only? This is the age of the internet, for goodness' sake.

'Intricacies of international law' And yet thousands of other websites manage it just fine...

Anyway, WALTR is good software and congrats if you win this because it's worth having.
Score: 2 Votes (Like | Disagree)

Winners will be chosen randomly on April 6 and will be contacted through email.

Today I learned that .ASS is a file extension. Thanks, macrumors!


there are 2 types of people, the ones who call these types of subtitles 'Advanced SubStation Alpha' and the ones that just call it .ASS :D
Score: 1 Votes (Like | Disagree)

I guess they meant 16th?

Seems like some cool software to have. $30 is a bit steep, but I could see myself paying that much if I ever needed to transfer a lot of files (enough files that it would take me an hour or more of handholding iTunes through the process.)


Sorry about that, that text was taken from another giveaway and I missed a date update. I'll send emails to winners on April 13, and codes shortly after.
Score: 1 Votes (Like | Disagree)
Read All Comments