It's just after 9:00 a.m. on Friday, April 10, which means Apple Stores in Australia have opened up for the day. Prospective Apple Watch buyers in the country are already lining up outside of stores in the hopes of getting a chance to try on the Apple Watch in person.

Several Australians on Twitter and Instagram have posted images of people lining up outside of Apple Stores, and the first people waiting in line have already been allowed into the store to check out the Apple Watch display units. Several people are also live streaming their experiences with the Apple Watch on Periscope.

Finally get to try on one of these bad boys! They are pretty sweet!!!! #applewatch #tryon 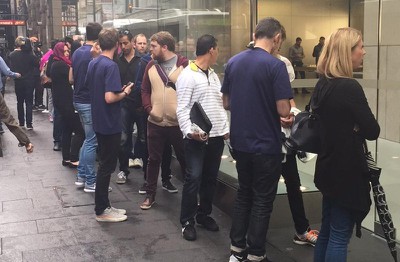 Line in Australia to see the Apple Watch, courtesy of Daniel Vuckovic
People are also beginning to line up in other locations around the world where Apple retail stores have not opened, and as can be seen in this image from Japan, stores that will be opening soon are already equipped with try on tables and Apple Watch display units.

Apple Store in Japan equipped with Apple Watch displays, courtesy of Hideki Ito
Apple Watch try-on appointments in the United States will not begin until stores open in the morning on Friday, April 10, but based on the lines and the crowds in other countries, it's likely most Apple Stores will be very busy tomorrow. Apple Watch pre-orders will be available beginning April 10 at 12:01 AM Pacific Time.
Related Roundup: Apple Watch Series 6
Buyer's Guide: Apple Watch (Caution)
Related Forum: Apple Watch
[ 139 comments ]

Douglas B
Big wrist update after try ons in Sydney.

42mm Classic Buckle: I could do this up on the last two holes but the very last hole was more comfortable.

42mm Sport strap:
I could do up the Sport strap on the last hole but to be comfortable I would need to make one further hole. The strap was long enough to accommodate me making one extra hole but I can't be sure (sorry) that the end would stay tucked in.

42mm Link bracelet:
I didn't close the clasp fully and I didn't want to break it. It may have been more likely to cut me than break. But I think I could use it with two extra links. The Apple Store employee was not currently aware if or when they might sell extra links.

Also, we pulled off the straps on one watch and at the top end it does say in the crevice, 'Designed in California. Assembled in China' but at the bottom end of the watch it still has those five or six pins exposed that were rumored to be for testing but I believe are there to accommodate future straps with tech features! Like the Pebble watch will have. Just have to wonder if the straps with tech features will be long enough.

The watches I tried on were in demo mode but they also had watches basically mounted on the table that had running software you could try.
Score: 13 Votes (Like | Disagree)

Long lines? Didn't sound that way in the article. Only saw one Instagram photo of a line, wasn't anywhere near crazy like the iPhone.


Of course it isn't as crazy like the iPhone. You can't actually buy the Watch yet.
Score: 12 Votes (Like | Disagree)

MEsplan
Have tried on a Watch from Australia

Very good experience to try on the watch this morning, I would highly recommend a try on as the size of the watch is a lot smaller than the website seems to show. Also nice to experience it on the wrist.

The news about the retina MacBook is that it is not yet on display in Australia so staff were recommending an online purchase.
Score: 10 Votes (Like | Disagree)

People cheered when we landed on the moon. Now we cheer over a watch.


How sad life would be if we could no longer cheer for anything less than a moon landing.
Score: 9 Votes (Like | Disagree)

Completely lost. Why would anyone want to wait in line for something that can be had online and emailed?


It's a first "smart" watch from Apple. You need to see it in person to decide which one you are going to get. It's not like ordering a pizza.
Score: 7 Votes (Like | Disagree)

doug in albq
I do not care what anyone says...but, skinny jeans and beards do not go together. :mad:
Score: 7 Votes (Like | Disagree)
Read All Comments

Friday June 11, 2021 1:13 pm PDT by Joe Rossignol
On his newly launched Front Page Tech website, leaker Jon Prosser has shared renders showing off the alleged design of the next-generation iPad mini, which he says are based on schematics, CAD files, and real images of the device. In line with details shared earlier this month by Bloomberg's Mark Gurman and Debby Wu, Prosser claims that the new iPad mini will feature slimmer bezels around...
Read Full Article • 139 comments

Thursday June 10, 2021 11:03 am PDT by Juli Clover
Tracking when you've opened up an email and what you've read is something that many companies and advertisers rely on for their marketing efforts, plus there are email clients out there designed to let users know when the emails they've sent have been opened up. Much of this tracking is facilitated by remote images that load when viewing an email, and some of it is even sneakier, with...
Read Full Article • 147 comments