EA Launches 'Get To Work' Expansion for 'The Sims 4'

EA today announced the first major expansion for The Sims 4, called "Get To Work", launching today. The expansion is aimed at introducing a handful of new interactive career options for Sims to explore alongside an update that allows users to create and run their own retail business.

The three new careers included in the expansion are Doctor, Detective, and Scientist, with each providing interactive experiences with fellow coworkers, the ability to work up the promotional hierarchy, or, of course, the choice to "wreak havoc on the workplace." 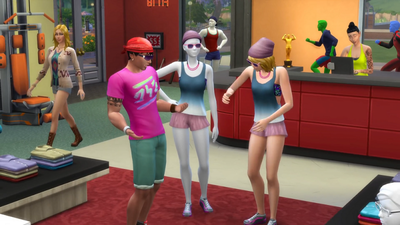 Doctors will make house calls, perform surgeries, and run diagnosis on sick patients, while Scientists will use their intellect to create cloning machines and freeze rays. The career path will even grant players the option to build the ElectroFlux Wormhole Generator to teleport them to the homeworld of the Aliens, making a return to the franchise after being absent from The Sims 4 base game.

Detectives appear to have the most work, checking in at the police station to grab cases, working crime scenes to find clues, interviewing witnesses, and eventually tracking down the prime suspect. They'll also be able to choose to patrol the streets and issue tickets to various low-level criminals.


If none of those career paths are of interest, the "Get to Work" expansion will allow players to build and edit their own retail location, including what items are sold there, as they see fit. EA promises that players who choose this option will get just as much variety and customization out of the career path as the three other options introduced in the expansion.


Players can set prices, hire and manage employees, customize uniforms and work to make the final sale. From clothing boutiques to art galleries, or bakeries to bookstores, there is no limit to the type of retail business that can be created. Also new are the Photography and Baking skills that give Sims new things to learn, new things to do and achieve and new creations to sell.

The Sims 4 initially launched exclusively on PC back in September 2014, hitting Mac platforms this past February. The "Get to Work" expansion can be purchased from EA's Origin platform for $39.99 for PC and Mac.

Wayfarer
No thanks EA, I need to "get to work" and earn experience in REAL life.

Why work as a cog in a corporate machine that exists to make somebody else rich? :(
Score: 2 Votes (Like | Disagree)

koulmj
does your sim make more than you? mine does.
Score: 1 Votes (Like | Disagree)

Kissaragi
Sims 4 seems to be going down as well as Simcity did.
Score: 1 Votes (Like | Disagree)
Read All Comments