First released in 2003, Command & Conquer: Generals stands apart from other games in the series because it takes place in the near future, and features the United States, China, and the fictional Global Liberation Army terrorist group. 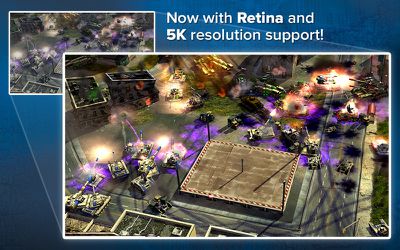 In a time of modern war, recent military aggressions around the globe have many nations worried. Between the United States, China, and the Global Liberation Army, tensions run high. Their leaders profess no interest in escalating the situation, but words ring hollow when satellite photos tell a different story.

Command & Conquer: Generals Deluxe Edition can be downloaded from the Mac App Store for $19.99. [Direct Link]

jorgebronze
Can we just have a re-release of C&C Red Alert in the App Store please.
Score: 12 Votes (Like | Disagree)

Really, I always wonder the same thing. Whenever stuff is re-released, it suddenly requires a brand new computer despite being very similar to the old version. Like AoE II HD and Photoshop.

It doesnt necessarily require a new rig. The only reason that requirements get updated like that is because the publisher (in this case us) is selecting the minimum requirements in terms of commonly available hardware that can run current OS's and more importantly for this game GameCenter. If we listed the old stuff, you wouldnt be able to run Mavericks or Yosemite on those computers, so it would be a moot point.
Score: 3 Votes (Like | Disagree)

I love that a game released in 2003, whose minimum specs of the time were quite low (it ran on Windows 98!) it's amazing how high the current specs are. I mean, the original Mac version came out before the Mac had switched to Intel, so you'd think the first-gen Intel Macs would be able to handle it!


Really, I always wonder the same thing. Whenever stuff is re-released, it suddenly requires a brand new computer despite being very similar to the old version. Like AoE II HD and Photoshop.
Score: 3 Votes (Like | Disagree)

Anonymous Freak
I love that a game released in 2003, whose minimum specs of the time were quite low (it ran on Windows 98!) it's amazing how high the current specs are. I mean, the original Mac version came out before the Mac had switched to Intel, so you'd think the first-gen Intel Macs would be able to handle it!
Score: 3 Votes (Like | Disagree)

It says multiplayer. Is it cross platform play with Windows players who have the game?


I'm afraid not. Multiplayer is utilizing Apple's Game Center for this version, which is unfortunately not cross platform compatible.
Score: 2 Votes (Like | Disagree)

Yeah, I bought that collection. Unfortunately, no mac support...even though there is a mac version of CNC generals and tiberium wars. It's a shame I have to reboot into windows just to play them.


Technically the so-called "Mac" version of Tiberium Wars was just the Windows version running under WINE. Most of the C&C games run fine with WINE, so you can play them that way without having to reboot.

Monday December 5, 2022 11:44 am PST by Juli Clover
Due to production issues at Apple supplier factories in China, the iPhone 14 Pro and iPhone 14 Pro Max are backordered and basically out of stock at every store. If you were planning to gift or receive an iPhone 14 Pro model for the holidays and didn't already get one, you're basically out of luck because they're gone until late December. Subscribe to the MacRumors YouTube channel for more ...
Read Full Article • 163 comments