As of today, members of the press are getting their first look at Apple Watches running near-complete versions of Watch OS, and several sites have shared new tidbits and thoughts on the device, which we've rounded up below.

TechnoBuffalo's Jon Rettinger tested the aluminum Apple Watch Sport, Apple's most affordable watch, giving a demo of the device's software. A hard press on the screen brings up different watch faces, each of which can be customized, as Tim Cook described during today's event.


In a second video, TechnoBuffalo takes a look at the design of the Apple Watch Sport, giving a close up of the backside of the watch and what it looks like on the wrist.
Mashable's Lance Ulanoff says all of the different Apple Watch versions "feel good to the touch" and that there's not much difference in the display between the Apple Watch Sport with Ion-X glass and the Apple Watch with sapphire crystal. He also has good information on the fit, which is comfortable despite its protruding back.

Apple Watch is not curved to your wrist. In fact, the back bulges out over so slightly to make sure the sensors touch the wrist. This didn't look like it would be comfortable, but it was -- completely. I also got to try a number of different bands. I think the rubbery sports bands are fine, but not my favorite -- they certainly make sense for the more active set. I like leather and metal options, most of which employ some sort of magnet to clasp and even adjust sizing.

TechCrunch's Darrell Etherington says that the Apple Watch system software is "expectedly intuitive." The Digital Crown takes a bit of time to adjust to, but ultimately, it "makes as much sense" navigation wise as the iPod's clickwheel. Touch input is "fast and responsive."

The camera remote, which allows the Apple Watch to control the iPhone's camera, is described as "especially clever" because it gives photographers a way to capture group shots and timed shots.

A passcode is required for setting up Apple Pay with the Apple Watch, and it has to be re-entered every time the watch is put back on after being removed to unlock Apple Pay. A payment is made by tapping the side of the Apple Watch twice and holding it near a payment terminal. According to Re/code, it does not look like users must have their iPhones with them to make payments with the Apple watch after linking.

Several small details on the Apple Watch have also been shared by Apple on its updated Apple Watch pages. The Apple Watch, for example, has a water resistance rating of IPX7 according to a footnote on the page, meaning its splash and water resistant but it is not waterproof. It can be worn during exercise, in the rain, and while washing your hands, but submerging it is not recommended.

An Apple Watch apps page on Apple's site shows off a range of apps that were demoed during the event and some that weren't, giving a quick look at some of the things the Apple Watch will be able to do. With the SPG Hotel app, Starwood hotel visitors can use the Apple Watch to unlock their rooms, and with the American Airlines app, Apple Watch owners can get their boarding passes right on their wrists. 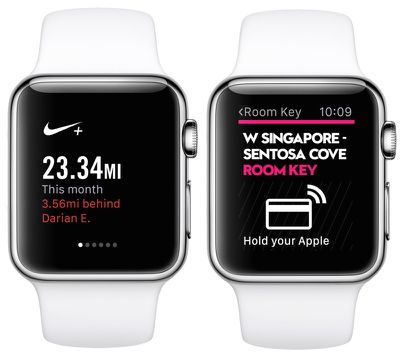 The Nike+ Running app displays distance, duration, and pace on the Apple Watch, while the Instagram app allows users to browse their feeds, like photos, and leave emoji comments. Shazam will identify songs, Dark Sky will let users know the chances of rain or snow, and the NYTimes Apple Watch app will offer headlines and breaking news.

iOS 8.2, released today, includes an Apple Watch companion app that has some information on Apple Watch setup. The Apple Watch will quickly connect to an iPhone using the camera. You just need to hold the Apple Watch up to the camera and align the watch display with the view finder. From there, the Apple Watch App Store is accessible, but it has yet to be populated with apps. It is not possible to delete the Apple Watch app from the iPhone in iOS 8.2.

Gildarts
Seriously, with the prices they announced today. Who gives a ****?
Score: 54 Votes (Like | Disagree)

Aniseedvan
My "Stuff I don't use" folder just increased by 1...
Score: 47 Votes (Like | Disagree)

appleguy123
Pretty ridiculous that you can't delete the watch app from your phone.

It should have just been placed in the AppStore.
Score: 39 Votes (Like | Disagree)

The first impressions have been very telling. Critics are gleaming with excitement ovee rhe new macbook. I just am not reading that excitement for the watch. Wait 8 months for the price drop and for version 2 for proper pricing and packaging.
Score: 33 Votes (Like | Disagree)

robjulo
How about doing your readership a service and post both positive and negative reviews instead of just the usual Apple boot lickers?
Score: 29 Votes (Like | Disagree)

Smartass
Judging by the videos i think that Android Wear is much cleaner and simpler to use. This Apple watch wants to have everything yet it doesnt have anything..
Score: 25 Votes (Like | Disagree)
Read All Comments