Apple Watch Battery to Support Five Hours of Heavy Usage, Will Last All Day With Mixed Use

With just over two days to go until Apple's big March 9 "Spring Forward" event that's said to be heavily focused on the Apple Watch, information on the device is leaking out at a rapid pace. Apple's been relatively quiet about battery life, stating only that the Apple Watch will need to be charged on a daily basis, but 9to5Mac has a few more details on how long we can expect the Apple Watch to last between charges.

According to the site's sources, final software tweaks and optimizations to the device have led to a battery life of approximately five hours of heavy application usage. The device reportedly will not run out of battery life "during a typical day of mixed and passive use," but it will need to be charged on a nightly basis as Apple has previously said. There's also been little said about how the Apple Watch will affect the battery of the iPhone, but 9to5Mac's sources say that there is no "meaningful" observed battery drain while using the device. 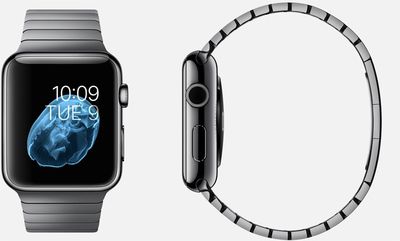 Power Reserve Mode can even be accessed when the Watch has a full 100% charge, and it is not solely activated when the Watch's battery life is low. The mode noticeably dims the display, slows down communication with the iPhone to an on-demand level, and puts the display to sleep after roughly two seconds of inactivity. One unit tested allowed access to all Apple Watch functions while in Power Reserve mode, while another unit was limited to the Clock face.

The Apple Watch is also said to have an interesting method of displaying remaining battery life. At 20 percent, the Battery Life Glance (which is just one of many default glances on the watch) will turn an orange/amber color to let users know that battery life is running low, and at 10 percent, it will turn from amber to red.

Along with battery life, there are also some new details on onboard storage. We've known for awhile that the device will have dedicated storage for features like music storage, but the exact amount of storage has not yet been shared. It appears that prototype devices have 8GB of storage, suggesting at least some devices will ship with that amount of storage space. Like with the iPhone, there may be several storage options that are available at an additional cost.

In just a few short days, we'll have a wealth of information on the Apple Watch. Apple is expected to share more details on battery life, storage space, pricing tiers, and accessory options at its upcoming March 9 event. Apple is planning to live stream the event, and MacRumors will also provide live coverage, both on MacRumors.com and through the MacRumorsLive Twitter account.

randymac09
I think we will be ok.

Maybe I just haven't seen it, but in the back and forth about battery life, no one has mentioned that Tim Cook, the one who stated the watch would have all day batter life, probably has a way more connected life than any one here.

Someone did mention his routine of waking up early and staying up late. However, no one has brought up the idea of how many notifications he receives a day. How many times he has to check his watch to see when his next appointment is, or if he will be on time for that appointment. He gets emails, texts, calls, all sorts of notifications throughout the day. If the watch can survive a day of use on his wrist, I think that it will do for most.

Or I could be wrong and everyone can laugh at me. Either-or.
Score: 53 Votes (Like | Disagree)

FrankySavvy
5 hours of heavy use is alot guys. thats like sitting down fiddling with it for five hours straight. I don't think most of us are gonna even come close to that. Its always gonna be on our wrist, say we use it for a solid 10 minutes per hour of our waking day, thats a little over two hours of constant use, the rest of the time the display will be off, so i think this is great news!
Score: 46 Votes (Like | Disagree)

troop231
Let's say worst case and most unlikely scenario: you interact with your Watch for 30 seconds each time, so with the stated 5 hours of life, you could get potentially 600 30 second interactions which should be plenty!

Again, this is worst case scenario and Apple is recommending 10 second interactions to devs for app designs. :)
Score: 18 Votes (Like | Disagree)

This is the reason I won't be buying one.


A watch that lasts you all day is the reason you won't be buying one? How's this any different from the iPhone (or any iDevice for that matter)?
Score: 16 Votes (Like | Disagree)

SMIDG3T
This is fine. I can tell you, if you spend 5 HOURS a day using the watch, you have a problem.
Score: 11 Votes (Like | Disagree)

I'm not surprised. it took Apple until the iPhone 6 Plus to upgrade the battery to a decent 2,915 mAh which still is horrible compared to the 3,200mAh on the Galaxy Note 4 and 3,000mAh on LG G3...etc. Android wear smartwatches come with 300-400 mAh and last up to 2-3 days depending on usage. My ASUS Zenwatch lasts 3 days. My Michael Bastian Cronowing smartwatch lasts up a week and a half long of battery life. 5 hours of battery life on heavy usage is what 80% of users will using. With the newly announced LG Watch Urbane with 300 mAh and Huawei Watch with 400 mAh, they will truly outshine Apple watch as Android smartphones have performed circles on iPhones since 2010 and will continue to do so unless Apple wakes up and actually innovates.

You have absolutely no idea what you're talking about.
Score: 11 Votes (Like | Disagree)
Read All Comments