Apple has launched a worldwide "Shot on iPhone 6" advertising campaign involving 77 photographers, 70 cities and 24 countries, with iPhone 6 photography to be featured in magazines, newspapers, billboards, transit posters and more. The large-scale marketing initiative has started rolling out in several countries across the world this week, including the United States, Canada, United Kingdom, Thailand, Malaysia, Tokyo and United Arab Emirates. 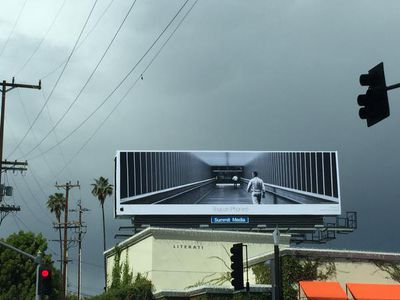 "Shot on iPhone 6" photo on billboard in Los Angeles (via Twitter)
A number of "Shot on iPhone 6" advertisements have begun surfacing on Twitter and Instagram over the past few days, with spots appearing on the back cover of The New Yorker magazine, horizontal posters in London's Euston Square subway station and in the Malaysian city of Bangsar, billboards in Los Angeles and Toronto, the side of a tall skyscraper in Dubai and more.

"Shot on iPhone 6" photo on back cover of The New Yorker (via Twitter)
The photography campaign began with Apple promoting a world gallery of photos taken with the iPhone 6 on its homepage over the weekend, including photo apps such as Instagram, Snapseed, VSCO Cam, Filterstorm Neue, Camera+ and Adobe Photoshop Express used for editing and filtering. The majority of photos shown provide scenic views of the outdoors, ranging from mountains and deserts to lakes and waterfalls.
Related Forum: iPhone
[ 116 comments ]


Luckily for you Apple does read these forums and have taken your opinion into consideration, please give them 24-48 hrs to begin removing all ad placements from building, billboards, magazines and online to accommodate you.
Score: 26 Votes (Like | Disagree)

Well done, Apple and it's fans

* Outta here before the onslaught of meme from the fandroids and anti-Apple fans bashers who continue to hang here jk *
Score: 12 Votes (Like | Disagree)
Read All Comments