Apple CEO Tim Cook on Friday made an unannounced visit to the iconic Apple Store in Covent Garden, a popular shopping and tourist location in London, according to The Telegraph. The chief executive also sat down for an interview with the British publication to discuss the Apple Watch, providing a few more interesting details about the device ahead of Apple's highly-anticipated "Spring Forward" media event on March 9. 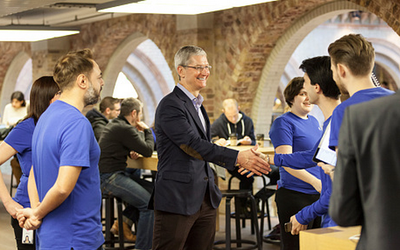 Cook claimed that the Apple Watch will have several features that go beyond timekeeping and health and fitness, such as the ability to replace large car key fobs that come with most current vehicles. "This will be just like the iPhone: people wanted it and bought for a particular reason, perhaps for browsing, but then found out that they loved it for all sorts of other reasons," he said.

The chief executive told Apple retail employees at the Covent Garden store that the Apple Watch will be unlike any other product the company has ever sold before. "We've never sold anything as a company that people could try on before", said Cook. He added that "tweaking the experience in the store" will likely be a requirement when the wrist-worn device launches in April.

During his visit to the Covent Garden store, one retail employee asked Cook what his biggest accomplishment was in the past year. "I'm proud we stayed true to our North Star", replied Cook. "We are pro-privacy, pro-environment and pro-human rights." He added that the Covent Garden location is one of his favorite Apple Stores and praised the retail staff for being such a contributing factor to Apple's success.

Cook has been traveling on an international tour this week, making stops in Belgium, Germany and Israel over the past several days. The chief executive kicked off the week in Belgium to meet with the European Commission, visited the newsroom of popular German publication BILD on Tuesday and traveled to Israel on Wednesday to sit down with President Reuven Rivlin, committing to continued growth in the country.

zedsdead
What I wouldn't give to completely get rid of my keychain.
Score: 18 Votes (Like | Disagree)

SatManager
Seriously, I can get rid of my Ford Key Fob and walk up open and start my car with my Apple Watch and iPhone? Now that is a neat reason to get the watch.
Score: 15 Votes (Like | Disagree)

I'm seriously so BOTHERED by the fact that Apple cares so much about making a WATCH and a CAR but can't even get WiFi to work in Yosemite!

Has Apple just lost the care they used to have for their customers? :mad:


Ah, something like this is posted in every single thread. Thanks for reminding me that apple has different divisions working on different tasks.

Something I keep wondering...

How well will the :apple:Watch possibly do in colder climates? When I'm outside in winter here, I have several layers on over my arms, plus gloves. The watch itself won't be warm, so I wouldn't want it to be the only layer between my wrist and the elements. If it's under layers, it's useless (plus it'll make taking those layers off and putting them on more difficult). If it's on top of the layers, it's tacky, I'd worry about it being stolen, and it may as well just be a tiny iPod touch strapped to my wrist for all it's able to do - it won't be able to monitor any health information an iPod Touch couldn't. Plus its pulse feedback wouldn't work.

I just feel like the :apple:Watch will only work for people who live in warmer climates.

Is there any way to hide any front page article tagged with #timcook? Sheesh. I don't care where he is or what he's doing at any given moment. Or ever really.


Apple put so much time and effort into the smooth scrolling functionality on Macs and iOS devices. You should try using it.
Score: 11 Votes (Like | Disagree)

aaronhead14
I'm seriously so BOTHERED by the fact that Apple cares so much about making a WATCH and a CAR but can't even get WiFi to work in Yosemite!

Has Apple just lost the care they used to have for their customers? :mad:
Score: 11 Votes (Like | Disagree)

I wonder if Apple will sell the Edition online, or if you will need to go to a store to get it. Do I trust UPS or FedEx with a $10,000 watch? Perhaps Tim Cook will drop a few more clues at events before the 9th.


There are many things you can buy online that are more expensive than an apple watch will be.
Score: 10 Votes (Like | Disagree)
Read All Comments

Thursday June 24, 2021 5:45 am PDT by Hartley Charlton
The highly reliable Apple leaker known as "Kang" and a number of other unspecified leakers have reportedly received warnings from lawyers representing Apple. According to posts on Kang's Weibo account, Apple recently commissioned a law firm to send admonitory letters to a number of leakers. The letter purportedly cautioned leakers that they must not disclose information about unreleased...
Read Full Article • 166 comments

Wednesday June 23, 2021 5:07 am PDT by Sami Fathi
Apple earlier today published a detailed report outlining in blatant terms the negative impact that sideloading would have on the iPhone and iPad, specifically calling out the impacts it would have on user privacy and security. Now, the company is continuing its PR push, with an executive noting in an interview that users who wish to sideload apps already have that option thanks to other...
Read Full Article • 412 comments

Wednesday June 23, 2021 9:37 am PDT by Joe Rossignol
Apple Watch Series 7 could feature a smaller "S7" chip, potentially providing more space for a larger battery or other components. According to a paywalled preview of a DigiTimes report accessed by MacRumors, next-generation Apple Watch models will adopt double-sided System in Package (SiP) packaging from Taiwanese supplier ASE Technology. On its website, ASE Technology confirms that its...
Read Full Article • 101 comments