During its investor call today, Chase announced (via AppleInsider) that over 1 million customers have provisioned their credit and / or debit cards for use with Apple Pay. Additionally, the company provided a look at the demographics of its Apple Pay users. 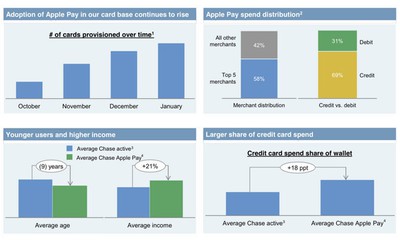 Eileen Sierra, CEO of Chase Card Services, said that its customers who use Apple Pay tend to be young and have higher incomes, with 69 percent of their Chase card Apple Pay transactions credit based.

Sierra also revealed that the financial company has seen "good growth" in the number of its customers provisioning their cards on Apple Pay. Those customers have been using their Chase cards through Apple Pay at the top five merchants 58 percent of the time, with all remaining merchants making up the remaining 42 percent.

While Apple hasn't provided adoption details on Apple Pay, CEO Tim Cook did announce in January that Apple Pay accounted for two of every three contactless dollars spent on American Express, Visa and MasterCard. Bank of America announced in January that nearly 800,000 of its customers were using Apple Pay, and point-of-sale suppliers have seen a massive increase in interest following Apple Pay's launch last October.

Although Apple Pay is having early success in the United States, it has yet to expand past its borders. Reports indicate Apple is in talks with Canadian partners to launch Apple Pay in that country as soon as March, while Visa today announced it would launch tokenization in Europe in mid-April, paving the way for Apple Pay to expand into the continent.


This is why Google Wallet is such a joke by comparison -- it has been "released" since 2011 and still hasn't achieved anything remotely close to what Apple Pay did in a few short months.
Score: 19 Votes (Like | Disagree)

Geez, get over yourself and your apple fandomi


Google has had four years to go around those problems that apple has shown they can do. Apple pay doesn't rely on the carriers, that is Google's fault and failure. If you can't get your foot in the door, find another door.
Score: 18 Votes (Like | Disagree)

Geez, get over yourself and your apple fandom


That's Google's fault for putting themselves in the position of being at the mercy of the phone carriers. Apple hasn't allowed carrier politics to influence the iPhone since it was launched. Verizon wanted to load iOS with their own bloatware and Apple said no.
Score: 9 Votes (Like | Disagree)

There was a day when having a computer at home was a luxury and then the day came when it became a necessity, even for the computer illiterate (banking, tax returns, on line shopping, keeping touch with family, etc).
The App that did it for the PC was the web browser (which drove the online technological revolution)

I can't help but feel that the smart phone is maturing faster from luxury to necessity especially when I see how well Apple Pay is doing.
Loved by all. The consumers, the banks and the retailers.

This is the killer App that makes owning one essential.
Score: 8 Votes (Like | Disagree)

This is why Google Wallet is such a joke by comparison -- it has been "released" since 2011 and still hasn't achieved anything remotely close to what Apple Pay did in a few short months.

Geez, get over yourself and your apple fandom
Score: 7 Votes (Like | Disagree)

This is why Google Wallet is such a joke by comparison -- it has been "released" since 2011 and still hasn't achieved anything remotely close to what Apple Pay did in a few short months.

Yow... the pure defensiveness in your post is scary.

Instead of concentrating on praising Apple for their good job, you have to immediately bring up their competition and squeeze in a jab. Even though Google Wallet's overall adoption is not the fault of Google at all, but the fault of the cell phone carriers who made every attempt to block it for the last four years.

Android's success seems to affect you in a very personal way, so much you feel you need to lash out at them unprovoked. It's very obvious, you may want to dial it back a bit.

I know this is a Mac fan site and all, but try to show a little maturity.
Score: 6 Votes (Like | Disagree)
Read All Comments