Microsoft today released an update for its suite of Office apps on Apple's iPhone and iPad App Store for users running iOS 8. The 1.6 updates bring, along with the usual bug fixes and performance enhancements, full support for saving and syncing documents via Apple's iCloud Drive service (via The Verge).

Microsoft says users of its most popular software like Word, Excel, and PowerPoint can now open, edit, and save their work to iCloud as a storage option in the "Places" section of each iOS app. 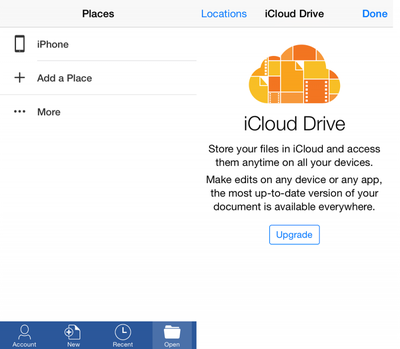 The additional storage method doesn't require users to have an Office 365 subscription and comes as an alternative to Microsoft's own cloud storage option, OneDrive. As pointed out by The Verge, light restrictions on a few file types may hinder iCloud's usage on Microsoft's iOS apps, however.

There’s also restrictions on filetypes, so while you can see a thumbnail preview of text in a document created with TextEdit on a Mac (stored on iCloud), you can’t access the document or edit it. Overall, it’s a fairly basic feature addition, but one that will please (and possibly frustrate) those who use iCloud on a regular basis.

Microsoft most recently added a similar feature to flesh out its iOS offerings with a partnership with Dropbox that let users open, edit, and save their documents using the popular document-saving cloud app. The Word, Excel, and PowerPoint apps launched on the iPhone in early November, bringing free document creation and basic editing to the service.

iWork is much better and free.
MS Office is total abomination of software no one needs it. Won't install even if for free.

...hello Office. Seriously, it's painfully obvious that MS has their sights once again on total domination in this space. Apple has done next to nothing for the iWork apps which IMO, were pretty nice on the iOS devices until MS released the current wave of Office for iOS apps. And given their recent actions in lifting restrictions on storage and use, I see iWork fading into oblivion unless Apple pulls a MAJOR rabbit out of their hat.
Score: 14 Votes (Like | Disagree)

NIKKG
M$ ain't playing around anymore, they going after Google big time. Good to see them make a comeback.
Score: 10 Votes (Like | Disagree)

...hello Office. Seriously, it's painfully obvious that MS has their sights once again on total domination in this space. Apple has done next to nothing for the iWork apps which IMO, were pretty nice on the iOS devices until MS released the current wave of Office for iOS apps. And given their recent actions in lifting restrictions on storage and use, I see iWork fading into oblivion unless Apple pulls a MAJOR rabbit out of their hat.

So I don't think Apple particularly cares about iWork or Apple Maps at this point. Safari... It's interesting that apple keeps updating it. I'm not sure why Apple hasn't just sat back and let Chrome take the lead.
Score: 5 Votes (Like | Disagree)

kds1
How do you save save a new document you've created in Word for iPad to iCloud? I can't figure it out. Seems that it's not possible.
Score: 4 Votes (Like | Disagree)
Read All Comments