Tuesday November 4, 2014 8:00 am PST by Kelly Hodgkins
Microsoft and Dropbox today announced a partnership that will bring Dropbox support to Microsoft's suite of Office mobile apps. Microsoft will add this new Dropbox feature in upcoming versions of Word, Excel and PowerPoint for the iPhone and iPad. 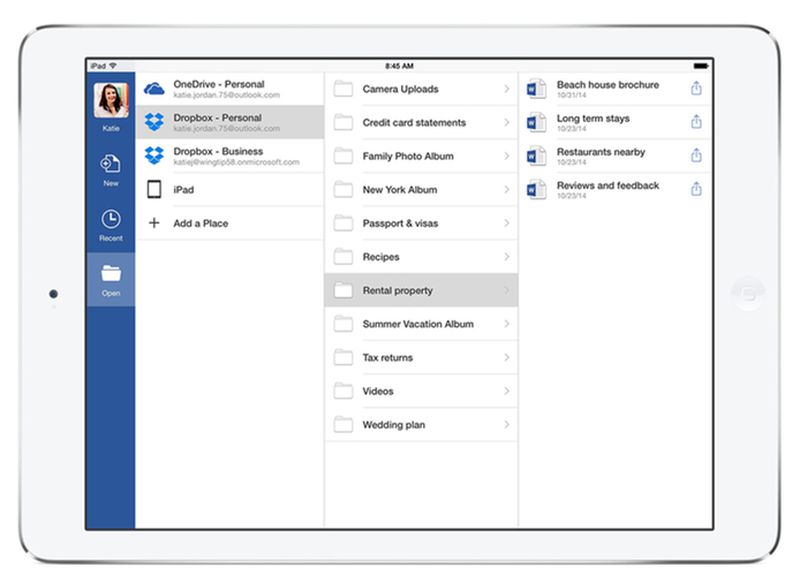 The new Dropbox integration would allow Office users to open, edit and share files that are stored in Dropbox. After adding a Dropbox account to an Office app, users will be able browse their Dropbox contents, which appear alongside OneDrive and locally stored files. All mobile edits will be synced to Dropbox automatically with a sharing option available within the Office app.

This collaborative effort is only in the beginning stages, with plans to expand Dropbox integration to other Microsoft products over time. After updating its mobile apps in the coming weeks, Microsoft is planning to add Dropbox support to its Office online web apps early next year.

springsup
Dropbox is now big enough that even a product as big as Office can't afford to ignore them.

This is a big day for Dropbox.
Rating: 16 Votes

I wish Apple would buy Dropbox and use it. I love its versatility.


Absolutey NOT! I don't want a great service ruined or made :apple: devices exclusive or simply shut down.

Thankfully Dropbox has firmly resisted buyout proposals (including from Apple, if I remember correctly).
Rating: 12 Votes

The benefit is that they can use Dropbox. :eek:
Rating: 6 Votes

brianvictor7
I wish Apple would buy Dropbox and use it. I love its versatility.
Rating: 6 Votes


exactly. give the user the choice and work on your product in the meantime and make us want to use it.

back in the day microsoft would be the last company one would expect to see a move like this from but now it would probably be apple.
Rating: 5 Votes

surfer17
So I guess, even Microsoft has accepted that OneDrive is sh**. Dropbox integration is excellent news for consumers.
Rating: 5 Votes

bp1000
Pretty nice considering they launched their own one drive cloud storage product.

nice to have options
Rating: 5 Votes