Back in March, Microsoft launched dedicated Word, Excel, and PowerPoint apps for the iPad in a first effort to bring Office capabilities to everyone, everywhere. The apps have been highly successful, garnering more than 40 million downloads, and as of today, Microsoft is expanding its Office for iOS suite, offering dedicated Word, Excel, and PowerPoint apps on the iPhone.

While Microsoft's Office apps for the iPhone have been designed with the existing iPad apps in mind, offering full feature parity, the iPhone versions have been built to adapt to the iPhone's smaller interface and optimized to put touch controls first.

All three apps take advantage of an innovative "vertical ribbon" that puts a full suite of editing tools right within thumb's reach at the bottom of the device's screen. Each individual app also has built-in tools to make the viewing experience more streamlined on the iPhone's Retina screen. 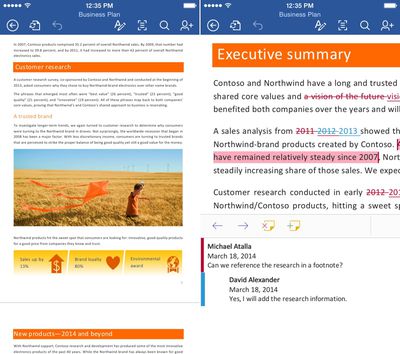 Word for iPhone, main view and review changes view
In Word, there's a Reflow button (located at the top menu bar) that shifts to a mobile-optimized view for reading and previewing what's been added to a document, and in Excel, Microsoft has focused on making it simple to edit formulas. Tapping on a cell brings up editing buttons and a dedicated formula keyboard.

Excel has a fullscreen view that lets users have an unobstructed view of their spreadsheets, and PowerPoint has similar tools, including the ability to project slides from the iPhone using AirPlay.

In addition to expanding its Office apps to the iPhone and updating its iPad apps, Microsoft has also decided to offer the core Office experience on the iPhone and iPad to all users for free. That means Office users will no longer be required to have an Office 365 subscription in order to access features like basic editing.

Word, Excel, and PowerPoint users on iOS will be able to view, edit, create, and print documents for free, but many advanced editing capabilities will still be reserved for Office 365 subscribers. For example, advanced change tracking features in Word such as accepting or rejecting changes are reserved for subscribers, as are Pivot Tables in Excel and Presenter View in PowerPoint. Office 365 subscribers also get 1TB of OneDrive storage.

Microsoft's Office apps for the iPhone are compatible with the iPhone 5, 5c, 5s, 6, and 6 Plus, and include full optimization for the two larger-screened iPhones. iOS 7 or later is required.

Since releasing Office for iPad in March, Microsoft has added 150 new features. Microsoft's Principal User Experience Manager Han-yi Shaw told MacRumors that the company will continue to aggressively add features in the future, and it is investigating new iOS 8 technologies like Handoff.

Microsoft's updated apps, which are now universal, will be available today from the App Store.

Why would I want such a limited Office experience?

I mean it's still a free app, but to me this is just clogging my device's valuable storage for free.

Great. Another bloated app that won't do much except take up space on my iPhone/iPad, and demand money to work. I'm getting so tired of 'in app purchases'...

Jeez, there's no pleasing some people.

We're talking about free and open compatibility here - this update will be a great solution for people who are migrating from PCs. And for those who aren't, basic editing directly in these apps will save having to go through Pages and exporting a DOC/XLS/PPT file. This can only be a positive move to speed up workflows. Not everyone who requires Office needs top-end features.

And I should also add that this update brings the suite to an entire new level of productivity, making iWork look amateur by comparison. Apple really need to step up their game with the handling of iCloud and the U.I.
Score: 48 Votes (Like | Disagree)

ajguckian
Despite being "limited" I still appreciate the fact that they are doing something to be cross platform. I'm all in with Apple for personal computers and portable devices, but I still spend enough time (work) dealing exclusively with Microsoft that these offerings are quite useful.
Score: 37 Votes (Like | Disagree)

kmj2318
There are a lot of people who have to use Office for work. This is a value add for all those people because they can have access while on the go. It's not very hard to figure out. Just because you're not the target user doesn't mean it's bad.
Score: 29 Votes (Like | Disagree)

Why would I want such a limited Office experience?

If there's any reason to go with Microsoft Office over any other solution it's that it's the closest to the set Microsoft standard for obvious reasons.

The basic features mentioned here and then some I get anywhere else anyways...

I mean it's still a free app, but to me this is just clogging my device's valuable storage for free.

Great. Another bloated app that won't do much except take up space on my iPhone/iPad, and demand money to work. I'm getting so tired of 'in app purchases'...

Not really sure what there is to complain about. If you don't download it, how will the app just being available clog/take up space on your devices? It's not like this is the U2 download.:D

As with everything, some will find it useful and some won't. It's free for those who want it. But to complain about it taking up space on your device when you could, I don't know, not download it, seems a little like complaining just to complain.:confused:
Score: 24 Votes (Like | Disagree)

PinkyMacGodess
Great. Another bloated app that won't do much except take up space on my iPhone/iPad, and demand money to work. I'm getting so tired of 'in app purchases'...
Score: 11 Votes (Like | Disagree)

Monique1
You can certainly distinguish the younger people here from those that need MS Office to put food on the table.

One day you kiddies will find out that iWork will get you laughed out of the office. And if you send your colleagues a spreadsheet done in "Numbers" well, you might get laughed out for good. :)

Some of you might get through college by converting your Pages docs to Word if they're simple enough but eventually you'll have to get on board with the rest of the world when you get jobs that require document collaboration.

And enough with this anti-subscription nonsense. The 1TB cloud space is worth the fee alone. (Particularly for iPads with puny storage).
Score: 8 Votes (Like | Disagree)
Read All Comments