Apple in Talks With Content Providers for Web-Based TV Service

Rumors about Apple's television plans have died down in recent months as no new product has appeared, but the company hasn't given up on TV. According to industry executives that spoke to Re/code, Apple is in talks with television programmers over deals that would see the company offering a web-based TV service.

Such a service would potentially allow Apple to deliver customized television packages that would be streamed over the Internet, providing access to a bundle of channels from participating content providers. The service would not include a full lineup of channels like traditional cable, but it would offer a range of content delivered by Apple with its own interface on devices like the Apple TV. 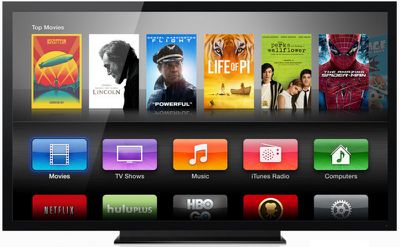 The theory is that Apple would put together bundles of programming -- but not the entire TV lineup that pay TV providers generally offer -- and sell it directly to consumers, over the Web. That means Apple wouldn't be reinventing the way TV works today, but offering its own version of it, with its own interface and user experience.

Apple is reportedly far enough along in the development of such a service that it has been showing potential programming partners demos, but talks remain in the early stages -- pricing and a potential release timeline are unknown.

Apple originally had very ambitious plans for revamping television, which included a desire to create a subscription television service that would replace existing cable subscription packages, but was unable to move forward with that idea due to pushback from content providers.

After a string of failed negotiations, Apple scaled back on its television plans, aiming to wedge itself between cable companies and consumers by designing a set-top box that would play live television in lieu of a traditional cable box. Rumors suggested Apple was in talks with Comcast and Time Warner over such a service, which would also include cloud-based DVR functionality, but that has yet to materialize and may have shifted into its newest web-based television plans.

Apple has repeatedly failed to reach deals with content providers due to their reluctance to change the status quo, but as Re/code points out, the television industry has been shifting towards web-based models in recent months, and both Sony and Dish have managed to establish deals with programmers to provide live TV and video-on-demand over the web.

During the company's most recent earnings call, Apple CEO Tim Cook once again reiterated that television is something that Apple "continues to look at." Apple is working towards finding a way to make a "greater contribution," than what it currently offers, he said.

ButteryScrollin
I look forward to using this service in 2019.
Score: 22 Votes (Like | Disagree)

AppleScruff1
Apple charges $5.99 to rent a movie, so I can imagine what a TV service will cost.
Score: 7 Votes (Like | Disagree)

mantan
A lot of Apple fans live in fantasyland on this topic. They imagine just getting the shows they want at a fraction of the price and sticking it to those evil cable companies.

They completely miss the root cause of the issue. The current model allows the content creators a lot of money. They aren't going to give up that model unless a new model makes them a similar amount of money or their is a massive disruption to the current delivery model. (Like what happened with the music industry when illegal digital downloads suddenly rendered their model obsolete.)

Apple isn't going to get into this unless they get their big cut of the pie. Sure you'll get some alternate delivery systems...just like the web based systems that are already out there. But new first run content and key sports (NFL, college football, etc)...the true money makers, aren't coming to Apple if it costs the content creators a penny. Cable and Satellite are already trying to get in front of this by offering their customers a web based and mobile applications.

Cord cutters represent a very small dedicated part of the TV viewing audience. In order for this to be profitable, you have to change the habits of the average viewer.

Unless Apple is just looking to duplicate a Hulu/Netflix model, I have a hard time seeing where they fit, where they can innovate and where it'll be a good value proposition.
Score: 7 Votes (Like | Disagree)

Z400Racer37
I don't understand why content creators would prefer to go through the cable providers to distribute their content... I mean sure, maybe you get more $ per sale, but you get far less sales than you do if you make people buy expensive, 500 channel packages, out of which they only watch a few networks. A lot of people don't see the value anymore, and you lost all sales that way. I know I don't se the value anymore, I haven't had cable for a year now. Don't miss it one bit.
Score: 7 Votes (Like | Disagree)

iBlazed
This will be great for cord cutters.
Score: 6 Votes (Like | Disagree)
Read All Comments