Accessory maker FiftyThree today announced the availability of the company’s popular Pencil stylus in Apple retail stores. Though the stylus has been spotted in select Apple stores in recent weeks, this announcement marks the first time the iPad stylus officially has been available in the Cupertino company's brick and mortar stores. Apple also recently began selling Pencil through its online store. 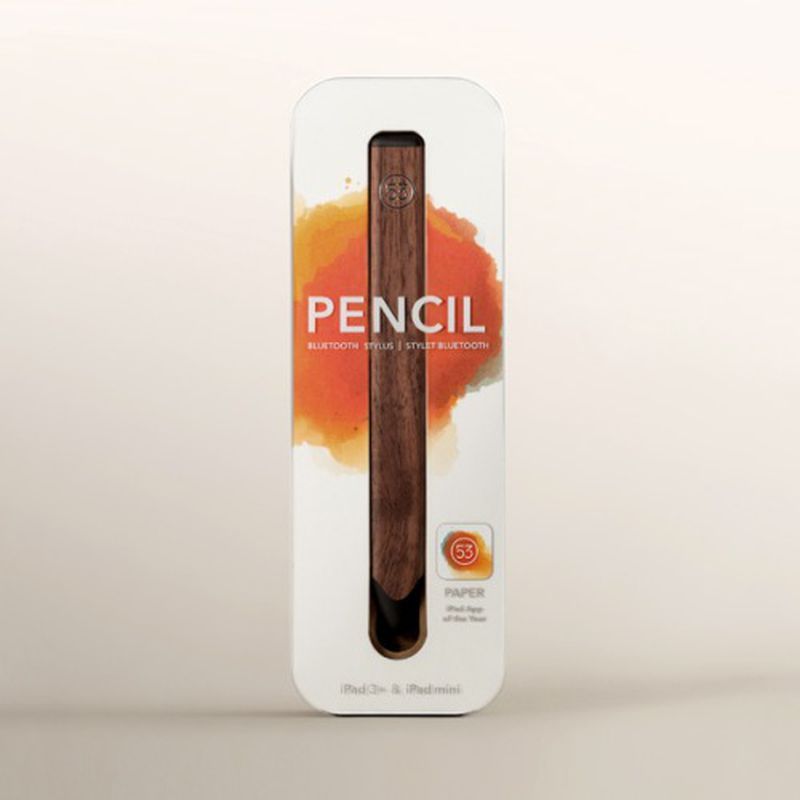 We’re proud to kick off the new year with a special announcement: Pencil is now available at Apple! For the first time ever, see Pencil up close and get it at your local Apple store.

Launched in November 2013, Pencil is a Bluetooth stylus designed for drawing and other creative activities on the iPad. The stylus includes palm rejection, surface pressure, and other functions such as erase and blend. Pricing starts at $49 for a graphite version and climbs to $59 for the hardwood walnut model.

FiftyThree’s Pencil iPad stylus is initially available in Apple stores in the US, UK, EU and Canada, with a global roll-out to follow soon.

While FiftyThree expands its retail presence, Apple is rumored to be preparing its own stylus to launch alongside the company’s rumored 12.9-inch "iPad Pro", claims KGI Securities analyst Ming-Chi Kuo. The optional stylus accessory would presumably appeal to enterprise and creative users who can use the stylus to take advantage of the iPad Pro’s larger screen.

calisurfboy
I'm a college student. I both do artwork on my iPad and take notes in class and have hundreds of dollars in styluses I have tried out through the years in my desk right now.

I'm sorry Steve Jobs and his fanatics but using only a finger to product sketches & notes, even over a short period of time (let alone the hours spent in a classroom) doesn't work.
Rating: 4 Votes

Stylus haters are going to get MAD on the Internet about this.

(Though I prefer Adonit anyday.)

What if the stylus haters never show up? Then you just look foolish.
Rating: 3 Votes

dysamoria
Well, Jobs can't veto styli anymore... Maybe Apple is warming up the process of warming up users to optional stylus use on a future iPad.

Personally, I seriously wish there already was a combo: Wacom stylus features with pressure, on a multitouch iPad operated by finger when you don't need to write/draw. Maybe the iPad Pro is that device. Since the rumors started, I've decided to, sigh, yet again, hold off my iPad purchase plans to see what materializes.

No, the Wacom-featured Android/Windows tablets aren't what I want.
Rating: 1 Votes

colmaclean
Wish Notability would support the 53 SDK, my world would be a little more complete...
Rating: 1 Votes

ronaldhennessy
Stylus haters are going to get MAD on the Internet about this.

(Though I prefer Adonit anyday.)
Rating: 1 Votes
[ Read All Comments ]