Apple's iBooks platform is seeing an average of a million new users per week after the company's decision to ship iOS 8 with the app pre-installed, according to Apple Director of iBooks Keith Moerer, who spoke today at the Digital Book World Conference.

Apple's decision to ship iOS 8 with several new apps pre-installed, including Podcasts and iBooks, was somewhat controversial because pre-installed default apps are unable to be deleted from a user's device. At the same time, though, default apps that come automatically installed introduce the content to a range of new people who might not have otherwise discovered it in the App Store. 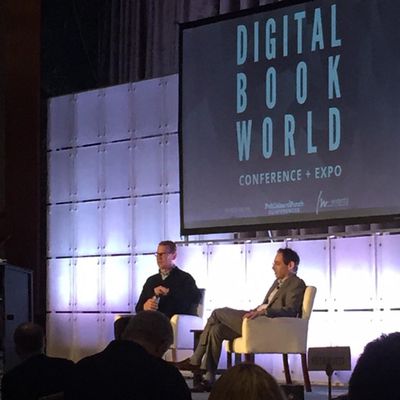 iBooks Director Keith Moerer at the Digital Book World Conference, image courtesy of David Lamb
Before iOS 8, the iBooks app had to be searched for and downloaded from the App Store, putting it on par with several other App Store-based e-books apps like Amazon's Kindle app for iOS. Pre-installing iBooks made it "so easy" for new users to try iBooks for the first time, said Moerer. Family Sharing, also new in iOS 8, helped to improve customer acquisition as well.

According to Moerer, iBooks consumption on phones is also on the rise since the launch of the larger-screened iPhone 6 and 6 Plus. "We are seeing more of our book sales starting to come from the phone," he told the audience at the conference. Moerer also highlighted the company's commitment to establishing relationships with creative professionals, including authors, and noted that indie publishing is one of iBooks' "biggest growth areas." Foreign publishing is also expanding, with Spanish-language publishing becoming a larger part of Apple's business in the United States and Japan seeing a lot of growth.

Moerer commented on the overall e-book market, saying that while Apple has noticed a slowdown in "other digital media businesses", the company is content with "our place within it" and still has many opportunities for growth through leveraging other content from iTunes, including movies and music.

Competing book stores were also a subject of discussion, with Moerer pointing out that Apple does not charge for publishers to promote books, unlike other stores like Amazon. "We accept no co-op payments, no pay for placement," he said. Apple is most focused on supporting artists big and small, according to a statement relayed by Gigaom:

Whether an author chooses to self-publish or work with a small or large publisher, I'm very proud that our business terms are the same. The same 30---70 split applies to a self-published author as well as an author published by the very biggest house. Because we're not a publisher ourselves, we work very closely with publishers and we view them as partners. We view what we do as an expansion of our support of print professionals on the hardware and software side and the way we run our other media businesses.

Apple's iBooks Store has gotten the company into hot water in the past, as Apple was found guilty of conspiring to fix the prices of electronic books. As a result, the company was subjected to a penalty of $450 million and forced submit to anti-trust monitoring.

iBooks has remained a major focus for the company despite its troubles, and along with making the app a default iOS app, Apple also introduced several new iBooks features in iOS 8 like an auto night mode, new organization, and more. OS X Mavericks also saw the introduction of a Mac-based iBooks app that allows users to read books on their Macs.

Rogifan
1M new users a week? Do we really buy that?
Score: 12 Votes (Like | Disagree)

RedOrchestra
DON'T DO IT - don't get started on the iBooks App, you'll forever lose control of the books to Apple. Use the Kindle App for Mac, buy only Kindle ebooks (same price, better / more selections) and if you want to switch to an Android phone or tablet, later, your books move with you.

No truer words than those from Hotel California;

'We are programmed to receive.
You can check out any time you like,
But you just can never leave!'
Score: 5 Votes (Like | Disagree)

JPark
I have a folder called crApps that I use exclusively for Apple's preloaded but unwanted apps.
Score: 5 Votes (Like | Disagree)

BornAgainApple
Didn't MS get sued by the EU for something like this with Internet Explorer?
Score: 5 Votes (Like | Disagree)

Didn't MS get sued by the EU for something like this with Internet Explorer?

Yes but around here it's perfectly fine when Apple does something like this, extraordinarily wrong when anyone else does. Did you not read the rules? Laws should exclude Apple when they work against Apple or be changed to support Apple when they don't align with what Apple wants. Patent law is "outdated," "stupid," etc when a patent works against Apple but brilliant, "sock it to them Apple" when it's favorable. Court decisions against Apple beg for legal system overhauls, "judge should be removed," etc but court decisions for Apple are celebrated as victories of our superior justice system. When a ruling is simultaneously for Apple and against Samsung on some points and for Samsung and against Apple on others, only the Apple ones are celebrated and the Samsung ones are completely in the wrong. Get with the program man! ;)

Same applies for analyst quotes who are geniuses and/or quoted to no end when they say nice things or show growth exhibits for Apple but are "morons", "stupid" and "never right" when they say or show anything the other way.

Apple's decision to ship iOS 8 with several new apps pre-installed, including Podcasts and iBooks, was somewhat controversial because pre-installed default apps are unable to be deleted from a user's device. At the same time, though, default apps that come automatically installed introduce the content to a range of new people who might not have otherwise discovered it in the App Store.


The obvious compromise is to ship the apps by default but allow users to delete them. In cases where the app code provides core functionality, allow users to hide the app.
Score: 4 Votes (Like | Disagree)
Read All Comments

Sunday October 2, 2022 6:41 am PDT by Joe Rossignol
Apple is developing new iPad Pro, Mac, and Apple TV models, and at least some of these products will be released in October, according to Bloomberg's Mark Gurman. However, Gurman continues to believe that Apple is unlikely to hold an event this month. In the latest edition of his Power On newsletter, Gurman said "the big iPhone 14 unveiling last month was probably it for Apple in 2022 in...
Read Full Article • 180 comments