After sending out an email to developers earlier in the week detailing App Store price changes coming to a few territories, Apple has today raised the price of apps in all countries within the European Union, Norway, Russia, and Canada. The price increases are due to shifting currency exchange rates and tax increases in some countries. 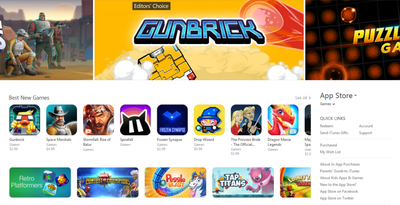 Just last week Apple raised developer program prices in a number of countries, most notably Germany and the UK, so today's app price hikes in these territories no doubt fall in line with the company keeping up with fluctuating currency values and foreign exchange rates.

Both changes come on the heels of Apple celebrating the App Store's biggest sales day in history on New Year's Day, along with a prosperous 2014 that saw total developer earnings hit $25 billion since the store's opening.

Well, not entirely. They've increased taxes on software within the EU and Apple (unsurprisingly), have decided to let their customers take the hit.

I know, they're not a charity.

There's a lesson in there somewhere...

Oh yeah! That's what it is:

Businesses pay exactly $0 in taxes. Their customers pay them.
Score: 8 Votes (Like | Disagree)

They've increased taxes on software within the EU

Actually, they haven't. They changed the rules on where VAT has to be paid. Until 31 December VAT had to be paid to the country the company selling software/music files/e-books is registered in (Luxembourg in Apple's case). Since 1 January VAT is paid to the consumer's country of residence. That VAT varies between 17 % in Luxembourg and 27 % in Hungary. It's the same in the US, just exchange country for state and VAT for sales tax.
Score: 6 Votes (Like | Disagree)

macintologist
This is a result of a much strong dollar in the last few quarters. Can't blame Apple for simply responding to currency exchange markets. It takes more  to buy a $ than it used to.

Nobody ever told you that, and I'm certain you can't point to any printed source to support your comment.

Lol ever seen... idk... CNBC? or Fox a half a decade ago before the Democrat was there to knock? Or countless articles in the Wall Street Journal? Or Forbes? Or Bloomerg?

How about the fact that the Monetary and Fiscal policies of most major economies around the world keep drifting towards more of both?

...But as long as you assert that you're sure, I guess it never happened. So much for that.


Go ahead and move to a country that is in a deflation spiral and see if you enjoy living there more.

Singapore is doing just fine. So is Hong Kong. So is New Zealand. In fact they're doing a hell of a lot better than the countries who have chosen to run up their national debt to absurd levels, some even surpassing the GDP of the nation, who are now trying to inflate away their debts by STEALING the purchasing power of their currency from their citizens to try and pay for their reckless behavior. Yeah. Deflation would more certainly cause their default. But let's not pretend that they're going to pay back the money they owe anyways. And let's not pretend that making a loaf of bread cost $10 instead of $1 is better for anyone.

Or actually, you might not even have to move, as the Eurozone is moving right into deflation at the moment. Let's see if you will still cheer for falling prices when you're unemployed.

Case in point. And yeah, The worst thing that could happen to me is that the price of the things I need to live goes down. I mean, I would just HATE the stuff I need being cheaper. Let's STEAL my purchasing power through inflation and force me to buy things sooner instead of saving and investing my money for later use? Hell, If inflation is so good, why don we do like 10% a year? how about 20%? I mean, if it's so good, how can we have too much of a good thing? Why don't we turn it into how Belarus is right now, where people are spending their cash buying anything that anyone will sell, because their currency is losing so much value they want to be able to trade in real assets, instead of worthless paper? I mean, look at all the demand it stimulated!! :eek:

1. If I lose my job, maybe it was a job that was a creation of an inflationary/high debt environment that should not have existed to begin with, and would not have existed without the government intervening into the economy where it doesn't belong in the first place? Or something?

2. Maybe that would free me up to do something a little more productive than throw money into whatever asset the Federal Reserve feels like inflating... or, I mean "Stimulating" at the time? Maybe engineer something that would actually be useful, and better me and society?

...Nahhhh let's keep pretending like we're the smartest people in the room and distorting the economy as we see fit. I mean, it's going so well and all. Better.

Prices have always gone up, but at least where I live, people can afford more now after one hour of work than they could when I was a kid (3 decades ago). Still, people whine about inflation.

No they haven't. In fact, declining prices were a common thing before the Federal Reserve. It only makes sense. As you get better and more efficient at producing things, It cost you less to produce the same things, and so they can be sold cheaper. Rising prices as a product of a distorted monetary supply. That's why when people divide this year's prices by last year's prices and get their inflation number, its wrong. If you want an accurate number for how much prices increased, you need to take prices now and divide it by what prices WOULD HAVE BEEN if X central bank wasn't inflating their currency into oblivion. And yeah, I whine about inflation because they have NO RIGHT to STEAL the value from MY ASSETS. And if you like asset devaluation so much, why don't I go and beat the crap out of your car with a bat and see how much you like that asset devaluation? I mean that'll stimulate the auto body industry if nothing else. Isn't that great?
Score: 3 Votes (Like | Disagree)

8012R3
The in-app subscription rates for the GetCloak VPN service have increased too in my country. Gone from 6.99 to 7.99 a month.


It's ok, I'll subscribe via the website instead, for less money, completely cutting Apple out of the loop. More money for the developers, none for Apple!
Score: 3 Votes (Like | Disagree)
Read All Comments

Thursday December 8, 2022 7:05 am PST by Joe Rossignol
iOS 16.2 is expected to be released next week following nearly two months of beta testing. With last-minute additions like Apple Music Sing and Advanced Data Protection, the software update now has over a dozen new features for the iPhone. Below, we've recapped many of the new features coming with iOS 16.2, including Apple's new whiteboard app Freeform, two new Lock Screen widgets, the...
Read Full Article • 77 comments