Apple today was awarded a new patent by the U.S. Patent and Trademark Office that concerns a new type of digital stylus that translates a user's handwritten note into a digital version when connected to a smartphone, tablet, or any "digital computing device" (via Apple Insider).

The patent also details various exchangeable tips for the stylus, including actual ink, markers for a whiteboard, or a rubberized nub akin to most popular tablet styli. The stylus activates when various motion-sensing hardware, including accelerometers, detects when the pen is picked up out of its dock, pressed to a writing surface, or simply turned on manually. 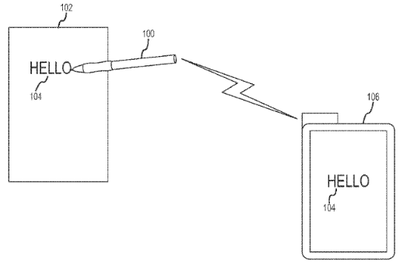 Thanks to motion sensors able to detect a 3D plane, the stylus uses an initial zero point to transmit the movement and flow of handwriting as varying changes in position to the desired computing device. This technology also means an actual surface isn't needed to transmit data -- simply writing notes in the air would suffice. The patent even details ways for users to choose how the data is transmitted, including continuously or at chosen intervals, allowing battery life to be preserved.

As noted by Apple Insider, there are many practical solutions for Apple's new patent. The pen allows a user to display their writing on multiple displays, a possible solution for work meetings and classrooms. It could also be a digital solution for note-taking, as the user would take notes with the pen on a paper tablet, and a digital copy would be sent to a phone or tablet tucked away in a bag. The automatically produced digital backup could then be more easily edited and shared.

The patent isn't exactly new, being initially filed nearly five years ago in January of 2010, and is by no means a confirmation that Apple will be moving forward with a smart stylus of any kind. But, like most patents, it is an interesting glimpse into what possibilities the company is looking into for the future.

flottenheimer
So, in one scenario, this special pen would let me write on paper  with ink  resulting in both a paper and a digital copy of the note? Correct?

So, in one scenario, this special pen would let me write on paper  with ink  resulting in both a paper and a digital copy of the note? Correct?

If the price wasn't too steep, I'd really, really like that.


That's exactly what they mean. Not only paper, but brainstorming on a whiteboard, or Smartboard or even in the air. The naysayers so far haven't really read the article. The ability to change tips for various purposes, the ability to share your written material in real time with numerous iPads at the same meeting on any surface, etc. Lots of possibilities.
Score: 14 Votes (Like | Disagree)

Sandstorm
Fingers crossed this means Apple is considering stylus... I absolutely, totally would love and use stylus input on an iPad (Pro?) for various creative purposes.
Score: 14 Votes (Like | Disagree)

Another patent? How many is it now?


The one for the rectangle with rounded corners was one of the most important. :D
Score: 10 Votes (Like | Disagree)

The one for the rectangle with rounded corners was one of the most important. :D


I agree with you that trade dress is VERY important & worth protecting probably even more than hardware or software features... as many purchases come down to the visual appeal of a product. Insightful post & I'm happy to concur.

Unless of course, you did not mean it & were dragging out the most tired old trope for a lame flogging of a long deceased horse in an effort perhaps to successfully post the least humorous and least original comment of the day... If that's what you were after, then I'm happy to say: please let the deadest of dead unfunny memes lay.
Score: 8 Votes (Like | Disagree)

Rogifan
I'm not sure what's unique about this to award it a patent. But Apple has at least 20 patents/patent applications for some sort of smart pen. How long does it take for them to bring something like that to market? You want to really kill off Microsoft Surface? Introduce proper pen support for iPad.


Yes for the majority of things one does on an iPad a stylus is not needed. :)
Score: 6 Votes (Like | Disagree)
Read All Comments