As the Christmas holiday approaches, Apple Store shipping estimates for both the iPhone 6 and the iPhone 6 Plus from all carriers in all colors and in 16 and 64GB capacities have now improved to just 1 business day in the United States, bringing the company close to reaching a supply/demand balance on those devices.

The larger-capacity 128GB devices remain somewhat more constrained than the lower-capacity models, and ship in 3 to 5 business days.

Shipping estimates are similarly improved in many other countries, including Australia, New Zealand, Canada, the United Kingdom, Mexico, Thailand, Philippines, and more.

Throughout the month of December, shipping estimates have been slowly improving as Apple has catches up with demand, and in early December, estimates had improved to 3 to 5 days for 16/64GB models and 7 to 10 days for 128GB models. Last week, estimates for the 16and 64GB models improved further, reaching 1 to 3 day estimates before jumping up again this week to just 1 day. 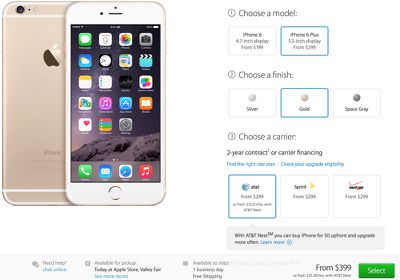 The iPhone 6 and 6 Plus have been severely constrained since their September debut, but Apple has worked hard to improve available supply, going so far as to reportedly delay mass production on the rumored iPad Pro to focus on producing more iPhone 6 Plus units.

In store supply of the iPhone 6 and 6 Plus has also seen major improvement over the course of the last few weeks, and in many stores around the country, it's now possible to walk in and purchase an iPhone 6 or 6 Plus. According to tracking tool iStockNow, iPhone 6 and 6 Plus units from all carriers and in all colors and capacities are widely available at most stores.

Back in October, Apple CEO Tim Cook said that demand for the iPhone 6 and 6 Plus was "far outstripping" supply, but based on the continually improving shipping times, Apple appears to be on track to meet its supply goals before the end of the year.

Throughout the month of December, shipping estimates have been slowly improving as Apple has catches up with demand, and in early December, estimates had improved to 3 to 5 days (https://www.macrumors.com/2014/12/03/iphone-6-6-plus-shipping-times-improve/) for 16/64GB models and 7 to 10 days for 128GB models. Last week, estimates for the 16and 64GB models improved further, reaching 1 to 3 day estimates before jumping up again this week to just 1 day.


Why are you looking at the back?
On mine, I find the front has the most utility :D
Score: 4 Votes (Like | Disagree)