Apple has just kicked off its deals for its one day Black Friday shopping event in the United States, and as previously announced, the company is offering special Product (RED)-branded iTunes gift cards with the purchase of an iPhone, iPad, Mac, iPod, Apple TV, or Beats by Dr. Dre headphones. 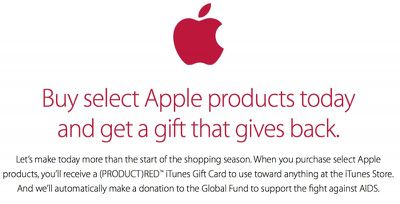 Apple's (RED) Black Friday shopping promotion will last for a single day and the deals are available both in-store and online. Along with (RED) gift cards, Apple also plans to donate a portion of retail sales on Friday, November 28 and Monday, December 1 to the Global Fund to fight AIDS.

Alongside Apple, many other retailers are offering significant discounts on Apple products and accessories. While some of the deals began yesterday ahead of Black Friday, many of the discounts are still available and will be valid through the end of the day.

Best Buy and MacMall are offering significant discounts on a range of different Macs, with prices up to $200 off, and Best Buy is also discounting its entire iPad stock by up to $100.

Target is offering gift cards up to $140 on the iPad Air 2, iPad Air, iPad mini 2, and iPad mini 3, while Sam's Club has the best deal on the iPhone 6, offering it for $100 off. Online only stores are also offering deals, with Twelve South, for example, discounting several products and Speck offering 25 percent off many of its iPhone cases.

Following in the footsteps of retailers, app developers are discounting their apps in the iOS and Mac App Stores, and a list of popular discounted apps can be found at our sister site AppShopper.

A full list of all the Black Friday deals on Apple products and accessories is located in our comprehensive Black Friday roundup, which is being updated throughout the day with new deals.

No Thanksgiving outside of US. No Black Friday. You people in other continents, please get that fact straight.

It looks like we will probably have to wait until World AIDS Day on Monday.
Score: 6 Votes (Like | Disagree)

How Ebenezer Scrooge of them!
Score: 6 Votes (Like | Disagree)

Sugadaddy
LOL, worst deal ever. Not even Apple Store cards you could use to get accessories or Applecare, just iTunes cards...

And not showing up in Canada either. Oh well, more profits, good for my apple stock.
Score: 6 Votes (Like | Disagree)

Well, I'm getting bored with this. So I had one look around to look for deals with today being an incentive. Since I saw no attractive BF deal in my area, the bucks will stay in the bank, and I ordered some fine Single Malt Whisky ... That saves a lot of time, and the day as well :)

graycrow
Nothing in the Europe. And I planned to buy an iPhone and iPad today, and not a low end models. First the new mini, no new ATV, then this - Apple gives me only disappointments this year.
Score: 5 Votes (Like | Disagree)
Read All Comments

Sunday January 16, 2022 8:56 am PST by Sami Fathi
Continuing the tradition set with the iPhone 13 Pro, only the highest-end iPhone 14 models will feature Apple's ProMotion display technology, according to a respected display analyst. Ross Young, who on multiple occasions has detailed accurate information about Apple's future products, said in a tweet that ProMotion will not be expanded to the entire iPhone 14 lineup and will remain...
Read Full Article • 58 comments