Warehouse club chain Sam's Club will be selling the 16GB, 64GB, and 128GB iPhone 6 at $99, $199, and $299 with a two-year contract beginning November 15th, according to a leaked flyer posted by GottaDeal.com (via BestBlackFriday.com). 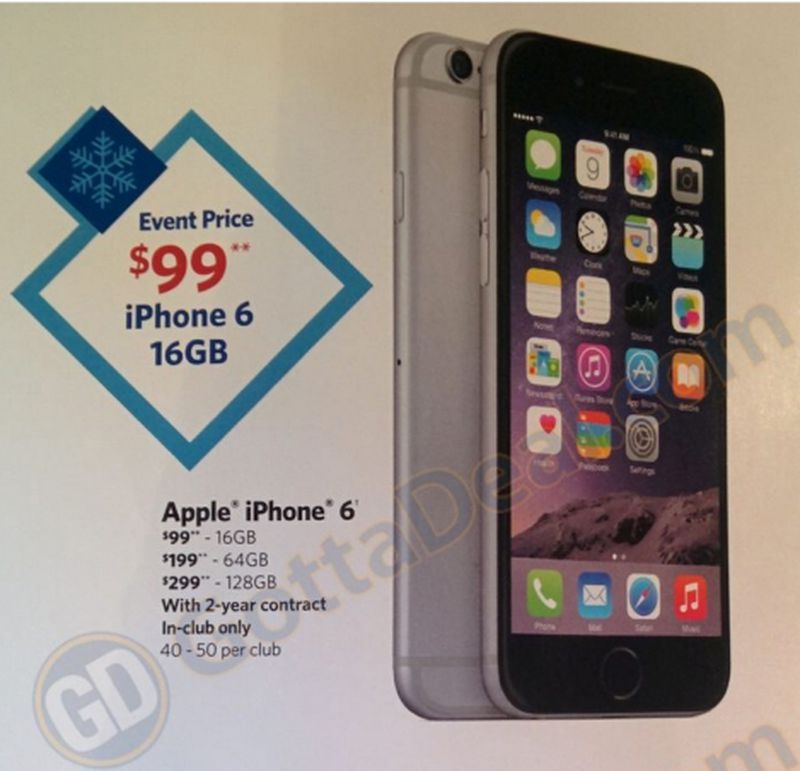 The flyer notes that each Sam's Club location will have between 40 and 50 units per club, as the promotion will run through December 31. Sam's Club is also selling last year's 16GB iPad Air at $100 off, which is in line with promotional deals from other retailers.

More retailers are expected to announce a number of discounts on Apple-related products as we move closer to "Black Friday", which is known as the traditional kickoff to the holiday season and falls on November 28th this year. Those looking to keep up with holiday sales on Apple-related products should check out our Black Friday Roundup, which will be frequently updated with the best deals as they are announced.

Kaibelf
Great! Now people can save money on the device and then go shopping at a store that will accept Apple Pay!
Rating: 16 Votes


I think you mean "... lowers downpayment on over priced contracts.."
Rating: 10 Votes


Nobody wants that huge thing...

Nobody wants that huge thing...

I have the plus. It is great. I use it like an iPad. No problem fitting in front pants pocket.
Rating: 2 Votes

Nobody wants that huge thing...

Sure, save a couple hundred, that's great — but the upfront price is really nothing compared to what it costs to pay off a two-year phone contract. Carriers have done a great job of convincing people that the $99 is the "price" of the phone when in fact you're paying a LOT more.

for alot of people that "cost" isn't anything extra than what they're already paying for their cell phone service.

It's not like those people are in a scenario where it's like " either upgrade for this phone or just cancel my phone service "
Rating: 1 Votes


Obviously they can only ship the 6 plus on boats. :)
Rating: 1 Votes
[ Read All Comments ]