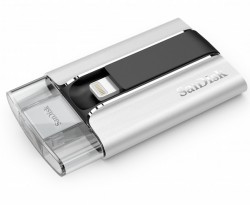 Similar to the Kickstarter-funded iStick from earlier in the year, SanDisk today announced the iXpand Flash Drive. The drive allows users to easily transfer photos, videos, and other files between an iOS device with a Lightning connector and a desktop or notebook with a normal USB port.

"According to IDC, nearly three-quarters of all images are now captured on smartphones and tablets," said Dinesh Bahal, vice president, product marketing, SanDisk. "With this significant increase in mobile-generated content, consumers are looking for easy ways to manage it all. In fact, our research shows that 82% of U.S. smartphone users find transferring photos, videos, music and other files to be very important to them. We created the iXpand Flash Drive to offer consumers a quick and safe way to move their favorite content between devices so it's available when and where they want it."

The flash drive also offers users an added layer of security in cross-platform encryption. While in the iXpand sync app [Direct Link], files can be password protected while the drive is connected to an iPhone or iPad, then decrypted on a Mac or PC and vice versa.

The 16GB and 64GB versions of the drive can be purchased directly off of SanDisk's official website today and sell for $59.99 and $119.99 respectively. Beginning November 16, Best Buy will exclusively sell the 32GB version in retail and on their website for $79.99.

Seems pointless when you have options like drop box. I see it working if you're using larger file formats, but even then, cloud services seem like they could be a viable solution instead.


Drop box is pointless unless you have Internet.
Rating: 6 Votes

H2SO4
They should have a bloody USB port on the side and a proper filesystem.
Rating: 4 Votes

szw-mapple fan
Not bad. All the Sandisk USB drives I had over the years had been fast and reliable.
Rating: 4 Votes

bubbleboil
If it only works with photo and video, it's rather useless?

What about other files like documents, songs etc?
Rating: 3 Votes

wires and things to plug in = a step backwards


Youll probably always have a port to connect to but you wont always have wireless.
Rating: 3 Votes

If it only works with photo and video, it's rather useless?


It also offers support for other file types.
Rating: 2 Votes

alksion
Seems pointless when you have options like drop box. I see it working if you're using larger file formats, but even then, cloud services seem like they could be a viable solution instead.
Rating: 2 Votes

cube
Too small. There should be a 512GB version.
Rating: 2 Votes

Porco
Nice, although it's a shame it seems to only be USB 2.0.
Rating: 2 Votes
[ Read All Comments ]