Sunday November 9, 2014 11:28 am PST by Richard Padilla
The Pangu development team today updated its jailbreak for iOS 8 and 8.1, bringing full support for the Mac. The update comes a week after the program saw an update for Windows that brought an automatic installation of Cydia and support for the English language.

Pangu's jailbreak tool for iOS 8 is the first that is compatible with any device running iOS 8.0 to iOS 8.1, including newer devices such as the iPhone 6, iPhone 6 Plus, iPad Air 2, and iPad mini 3. The jailbreak method allows users to install content like themes, tweaks, and apps from other sources than the App Store. The Pangu development team recommends that users backup their iPhones, iPads, and iPod touches before using the tool, and notes that devices upgraded over-the-air may need to be restored before being jailbroken.

Cydia administrator Jay Freeman noted on his Twitter that the Pangu jailbreak is "stable enough" and said that developers on Cydia are now able to mark their own apps as iOS 8 compatible. Members on our forums are also maintaining an active list of which Cydia apps are compatible with iOS 8 and Pangu's jailbreak, and interested users should look there for more specific information.

Pangu can be downloaded for OS X and Windows as an untethered jailbreak, meaning that users only have to apply the method once. The release of the tool follows an announcement by the Electronic Frontier Foundation yesterday stating that a new petition was filed with the Librarian of Congress to extend an exemption that allows jailbreaking to be legal. The exemption was last renewed in 2012 and created by the U.S. Congress in 2010.


Its iOS 8
Its already broken
So why not
Rating: 48 Votes

This jailbreak is from china!

So is the iPhone!
Rating: 36 Votes

Jamalien
"is stable enough"
sounds like Apple's mentality towards their software
Rating: 24 Votes

Sure I'll put a dubious warranty killing, potential phone bricking software on an £800 phone. What for, to make my phone look prettier or have a few more tricks? No thanks. What guarantees are there there's no hidden code mining my data?


Your post is full of inaccuracies. It does not void your warranty, restoring returns the phone to factory settings. Jailbreaking can not "brick" the device. The tweaks available enhance the overall experience. Nobody from Pangu is collecting data from you, you're not that important.
Rating: 12 Votes

_Refurbished_
"No reason to jailbreak"
Subjective. Here are some tweaks that completely change my iOS experience. Many know most of these tweaks, but for people that don't....

- Eclipse 2.0: Dark Mode for iOS and just updated for iOS 8. Sexy as hell on my black iPhone 6 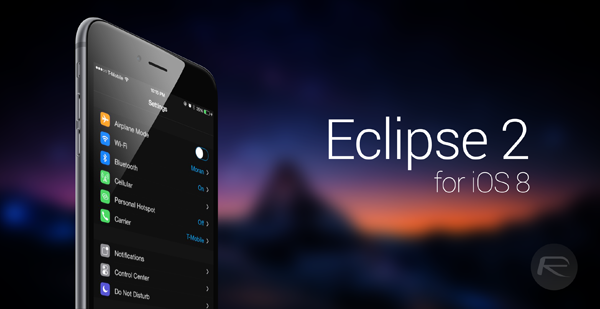 - ForceGoodFit: Optimizes apps for the iPhone 6 + 6+. Not compatible with some apps, but works wonders for those that do work
- CCSettings: Customize Control Center. Also comes with a handy "kill all apps" toggle so you don't have to kill apps one by one
- Activator: Gesture based customization for almost anything in iOS
- SwipeSelection:
http://www.idownloadblog.com/2014/01/14/swipeselection-pro-one-of-the-best-jailbreak-tweaks-of-all-time-just-got-better/

If you want to upgrade to a x.0 release, you can. You just lose your jailbreak temporarily. For those that are patient enough to wait for the 0.1 release, there's a good chance a jailbreak will come shortly after. My jailbroken 8.1 phone is much more stable than my non-jailbroken 8.0.2 phone.
Rating: 11 Votes

Futurix
iOS 8 removed any desire for me to jailbreak.
I just don't have the reason anymore.
Rating: 10 Votes

MaSx
I used to Jailbreak before but now it's just meh. Apple pretty much added the feature that I needed. Beside, with so many bugy iOS releases, you really don't want to bog it down and drain them battery even more further.
Rating: 9 Votes

Not paranoid, but realist. As a Network Security Analyst, I've seen some very interesting stuff from that corner of the globe on US servers.

Take it for what it's worth, but I'm steering clear of this rather unnecessary exploit injection for some trivial gains.

lol..and everything you see on CNN is also true because..according to your logic ( or lack thereof ) it's been said so on a major news network! :rolleyes:

The IQ on the Internet is really stunning!!


Ah I see. So as a "Network Security Analyst", you are more qualified to speak on this than the guys that literally wrote the book on iOS kernel security? The people that have CVE's in their names and have been personally thanked by Apple for reporting vulns? The experts that were the guests and speakers of honor at Hack In The Box and JailbreakCon? Nah, I think I'll listen to them over you. Unless you want to link to your CVE's and iOS security publications?
Rating: 8 Votes

It's the only ad blocker you will need. Even blocks those annoying ads at the beginning of videos.
Rating: 8 Votes