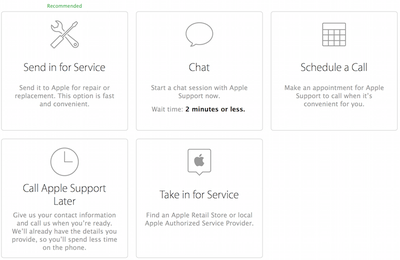 The new option, first spotted by 9to5Mac, is presented after a user defines what kind of problem they're having with a particular product. Users are then prompted to enter their location and are given a choice of what Apple Store they'd like to visit. However, the option isn't available for all issues. For example, users having battery issues with an iPad can make a Genius Bar reservation while users looking for help manually syncing their iPad to iTunes cannot.

In the last year, Apple has been overhauling its online support infrastructure, revamping its AppleCare website and chat interface. This is the latest move in the company's efforts to streamline its support and make it as simple as possible for customers to seek solutions for potential problems.

They are. Every new Apple store that opens, adds a genius bar.


they do not open that many new stores!

The growth of new fans is far greater than the stores opening ;)
Score: 3 Votes (Like | Disagree)

Though it's getting harder and harder to book an appointment, the places go very fast. Apple having grown might want to have a look at putting in place more genius bars to cope with the demand.


Putting in more genius bars sounds easy but it's not. They can't nod and have a space, staff etc.

pushing the schedule option to only certain issues is actually a good thing. Many issues don't really need a Genius Bar they can be solved via chat or simply following a set of instructions at home. And they can filter out appointments for things like "I forgot my yahoo password" which isn't a GB issue
Score: 2 Votes (Like | Disagree)

bushido
Initially i always assumed its great to have crowded Apple Stores but I've had to go there 3 times last month because of an rMBP issue and they barely ever had any appointments free and the hotline was always on hold for 8+ people.

Makes you kinda wonder if apple products are really that great if so many people have issues with them ;) not hating or anything, just something i find interesting. i suppose on the other hand you dont see it with other computer brands so obvious because they dont have their own dedicated stores.
Score: 2 Votes (Like | Disagree)

Though it's getting harder and harder to book an appointment, the places go very fast. Apple having grown might want to have a look at putting in place more genius bars to cope with the demand.
Score: 2 Votes (Like | Disagree)

SimonTheSoundMa
I've been watching two Apple Stores by me like a hawk for a Genius Bar appointment, been fully booked for 4 weeks. I managed to get one slot a week ago to go next week, only been watching for 3 weeks. Can't do a Quick Drop any more.

rMBP with a dead fan.

Customer service is so terrible these days.

Aside from adding stores, I think they are expanding existing ones. My local store closed temporarily, then reopened twice as big.

One by me (Bullring, Birmingham) has got stupid. The Genius Bar has moved outside of the shop, two Genius staff now stand behind a temporary barrier giving iOS support.

It appears many appointments are taken up with iOS problems, dropped phone or people that have no idea how to do menial things.
Score: 1 Votes (Like | Disagree)

This would be nice if there was an Apple Store near me. I'm in an area (Space Coast/Brevard County, Florida) that would likely have an Apple Store, but I have to drive an hour to Orlando to get to a store. This area has expected an Apple Store for over 7 years now.

I just do my own repairs now (unless it's still under warranty).