Thursday November 6, 2014 7:18 am PST by Kelly Hodgkins
In a newly posted video clip, screenwriter Aaron Sorkin spoke to Bloomberg's Emily Chang about his upcoming Steve Jobs biopic that is expected to begin filming sometime next year. When asked why he was filming yet another movie about the Apple co-founder, Sorkin noted that Steve Jobs' life could provide content for at least ten movies.

I think that you could do ten more movies about Steve Jobs, and I think if you lined up ten writers and said "write a movie about Steve Jobs", you'd get ten different movies, all of them worth going to see.

Though he spoke relatively freely about Steve Jobs, such as mentions of the three times he spoke with Jobs on the phone including one where he "fixed a couple of typos" in Jobs' famous Stanford 2005 commencement speech, Sorkin did not address the casting for his upcoming movie, which has been in flux over the past year.

Early reports had Leonardo DiCaprio, Matt Damon and Bradley Cooper allegedly considered for the leading role, and just weeks ago Sorkin announced Christian Bale was selected without audition for the part. Bale has, however, reportedly pulled out of the project and Michael Fassbender is now reportedly in talks for the role.

Sorkin went on to address the pressure he faces in writing the movie, noting it is "the same pressure that I feel when I'm writing anything...maybe with a little bit of sauce on top of pressure because he is a person that so many people have so many strong feelings about." He notes that he has met extensively with the other seven main characters in his Jobs movie, including Steve Wozniak, former Apple CEO John Sculley, and former Mac marketing chief Joanna Hoffman.

The film will include 30-minute segments that focus on three major Apple product announcements with Danny Boyle of Slumdog Millionaire fame as director. Seth Rogen reportedly is in talks to play Apple co-founder Steve Wozniak, while Academy Award nominee Jessica Chastain may also play an unspecified role in the film.

Jynto
Coming soon to a theater near you:

Steve Jobs with a Vengeance

Steve Jobs and the Deathly Hallows

The Chronicles of Jobs: The iPhone, the Mac and the iPad

TheRainKing
Instead of all these stupid movies, I would rather see a really good Steve Jobs documentary. It could have interviews from people who knew Steve best, and we might actually learn something we don't already know.
Rating: 10 Votes

Derekeys
Forget Jobs, I Want A Movie About This Guy

dannyyankou
Sorkin seems like he knows what he's doing. Actually getting to know the characters in the movie and consulting with them as opposed to the movie "Jobs".

Do we really need a new Jobs movie?

Just like I always wanted to read a bunch of books about Steve.

Its such a contemporary and epic legend. And its so fascinating on a broad human level to see what a legend like that was like and you can never find out enough things because we want to put together the puzzle of what it was like to be him and the little lessons we can learn from his powerful ways.

So yeah there should be even more movies.
Rating: 5 Votes 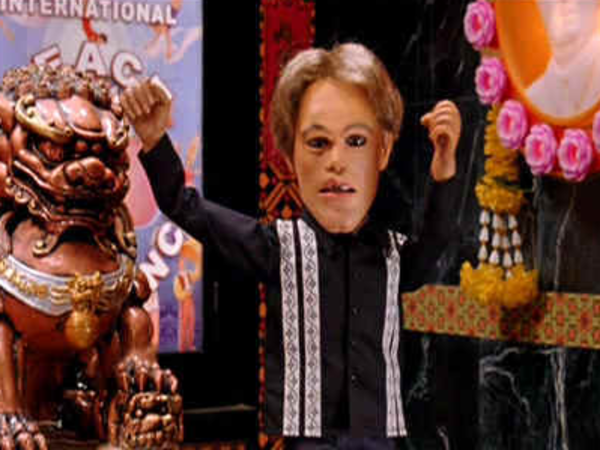 AmpSkillz
so funny to me that they announced this movie which is based on the authorized biography, then someone rushed out the low budget indie Ashton Kutcher movie in order to capitalize on beating this one to market. Now there are a bunch of ignorant people acting like the market has been saturated with Steve Jobs films and we don't need anymore.
Rating: 4 Votes

g0df4th3r
I hope they make an Apple movie similar to 'Saw'. Tim Cook, Craig Federighi, Phil Schiller, Jony Ive, Eddie Cue & Dre are all trapped in a building trying to escape death while being played around by Jigsaw aka Steve Jobs.
Rating: 3 Votes

Next thing we know, they'll be making a Tim Cook movie.


Reminds of the Al Gore doll in The Simpsons.

"You are hearing me talk."
Rating: 3 Votes