Nine Inch Nails frontman Trent Reznor, who serves as Chief Creative Officer of Beats Music, became an Apple employee alongside Jimmy Iovine and Dr. Dre when Apple acquired Beats back in May.

In a new interview with Billboard, Reznor revealed that he joined the company because Apple was "interested in tapping his creative energy" and that he's currently working on designing a product related to music delivery for Apple. According to Reznor, no one has hit "the right formula" when it comes to streaming music. 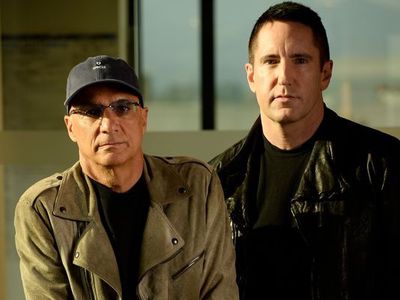 "I am on the side of streaming music, and I think the right streaming service could solve everybody's problems," says Reznor, who along with Ross will participate in a keynote Q&A at the Billboard/Hollywood Reporter Film & TV Music Conference being held at Universal City's Globe Theater on Nov. 5. "Ownership is waning. Everybody is comfortable with the cloud -- your documents, who knows where they are? They are there when you need them. That idea that I've got my records on the shelf doesn't feel as important even to me as it used to. I just think we haven't quite hit the right formula yet."

Reznor says his role at Apple is an evolution of his Beats role and that Apple has him designing products for the company. While he declined to go into detail, he did say that he's doing "very creative work that's not directly making music," but is instead related to music delivery. His work, he says, is "challenging" and "could have a big enough impact that it's worth the effort."

Beats was bought by Apple, and they expressed direct interest in me designing some products with them. I can't go into details, but I feel like I'm in a unique position where I could be of benefit to them. That does mean some compromises in terms of how much brain power goes toward music and creating. This is very creative work that's not directly making music, but it's around music.

Rumors have suggested that Apple plans to completely revamp Beats Music, possibly rolling it into iTunes. A rebranding is planned, and new features and a lower price could be part of the Beats Music redesign. It's possible that Reznor, who says he's working on the streaming music side of things, is helping decide on the direction Apple's streaming music service will take. Apple may be planning to unveil its revamped music subscription service and new branding as early as February, ahead of the 2015 Grammy Awards.

Reznor's full interview, which also includes tidbits on his early life, his interest in movies, his work on Gone Girl, comments on U2's "Songs of Innocence" iTunes release, and more, can be read at Billboard.

nikhsub1
Reznor is a super talent, that is for sure.
Score: 22 Votes (Like | Disagree)

Reznor is there for window dressing. What the hell does he know about how to stream music? He's suddenly a programmer?

Reznor is not there to create the latest streaming algorithm, he's there to find new CONCEPTS of how streaming can work. For example, should we download the next 3 songs to your device while listening to the previous one? How should we organize stations? Should there be stations at all? Should music change based on your mood? Not HOW to CODE it, but the IDEA of it. Throwing hundreds or thousands of ideas at a wall, and then going back and back and narrowing down to the right ones takes a LOT of time and thought.
Score: 17 Votes (Like | Disagree)

Could you name a good piece of music he has been involved with so I can take a listen please?

Watch the movie Social Network. He did the soundtrack.

Reznor is there for window dressing. What the hell does he know about how to stream music? He's suddenly a programmer?


Actually, Reznor knows a lot about programming. He has written some of his own music software that he uses to make music. He also has a team of very talented individuals that help program equipment NIN uses for live shows. Including custom applications that control PC Kinect cameras for live shows, lighting, and displays.

I remember back in '97 or '98 when he had a Mac Server farm and created a live orchestra/marching band completely from a synthesizer using 12 Mac Pro towers. It was later deconstructed and remixed for the album The Fragile.

You'd be surprised but musicians tend to know technology & electronics better than you think
Score: 9 Votes (Like | Disagree)

I guess he hasn't used Spotify then.
Score: 9 Votes (Like | Disagree)
Read All Comments

Sunday January 16, 2022 3:37 pm PST by Joe Rossignol
A bug in WebKit's implementation of a JavaScript API called IndexedDB can reveal your recent browsing history and even your identity, according to a blog post shared on Friday by browser fingerprinting service FingerprintJS. In a nutshell, the bug allows any website that uses IndexedDB to access the names of IndexedDB databases generated by other websites during a user's browsing session....
Read Full Article • 225 comments